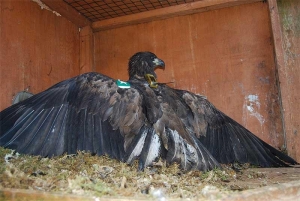 Male "Star" hatched in mid to late-April on the island of Vikna 165 kilometres N of the city of Trondheim in west central Norway. In mid-June Star was collected from a ground nest on the skerries off Vikna by ornithologists Bertil Nyheim, S. Garstad, and F. Pedersen from Prosject Havørn (Project Sea Eagle). As with female F (Fiadhna), Star was temporarily housed at our holding site in a converted barn in Stjørdal only five minutes from Vaernes airport where he was expertly looked after by Tom Roger Østeras. On 26 June Star weighed 4.75 kilos and was estimated to be 10 weeks old based on his tail length.

On 27 June Star was flown from Trondheim to Kerry along with 19 other eaglets and was housed in a large cage in Killarney National Park with a Hitra male. On 4 August we attached PVC wing-tags (white on right and green on left) and a solar-powered GPS satellite transmitter. The 70g solar PTT-100 from Microwave Telemetry takes GPS fixes every hour during summer daylight hours with the data transmitted to Argos on day 3.

Watch out for the next exciting movements of Star by clicking on Maps and GPS Tracking and selecting male Star!