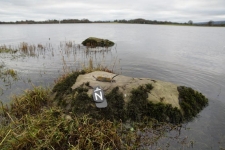 Sad end to a beautiful bird. The remains of our much travelled 2011 release male White-tailed Eagle Ingar was recently recovered from in Fermanagh. Unfortunately not much was left by the time the bird was reported to us by the landowner who found the bird. Its GPS satellite transmitter had stopped transmitting in early Dec but we hoped it was still ok as the transmitter had intermittent due to low light levels. Remains were collected and removed by the PSNI who today issued this statement:

"The remains of a white-tailed Eagle were recovered in Fermanagh on Saturday, February 7th in the Newbridge Road area of Lisnaskea. Const. Maurice Blair said, “Many people may not be aware that these birds are present in Fermanagh and that they are a protected species. We are working to establish the circumstances. If you can help please call the 101 number, quoting reference 6467215. Alternatively information can be passed via the independent Crimestoppers number on 0800 555 111.”

Ingar was almost 4 years old and spent most of 2014 on Upper & Lower Lough Erne. He was named Ingar (Norwegian name) and was released in Killarney National Park, Co Kerry, in 2014 as part of the reintroduction programme for the species managed by the Golden Eagle Trust in partnership with the National Parks & Wildlife Service. Given a chance he would have nested on one of the many islands on Lough Erne. Although we dont know the cause of death illegal poisoning has been the greatest mortality factor in Ireland. We urge anyone with any knowledge of the circumstances leading to the death of this bird to contcat the PSNI

Published in Satellite tagged WTE Blog
More in this category: « Aoibheall explores Lough Derg Wandering Star winters in the Midlands »
back to top