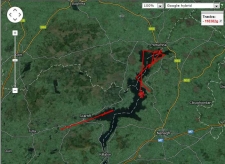 Over the last four and a half months or so since she took her first flight from her nest high up in a Scots Pine near Mountshannon, Co. Clare, its been fascinating to see the 2014 WTSE chick Aoibheall explore her watery environment on beautiful Lough Derg. Over the first four months she has been pretty much a ‘homebird’ staying within a kilometre or two of her natal area most of the time and only very occasionally (13-15 Oct) roosting away from Mountshannon. All that began to change in late November. On 23/11 she roosted for the very first time on Inis Cealtra (Holy Island) within a stone’s throw of the ancient round town and monastic settlement founded originally back in the late 7th Century by St. Caimin (hence the name of Aoibheall’s male parent!). Perhaps she was looking for the ancient ones blessing before she headed off on her travels?!

On 25/11 she had left Lough Derg for the first time and travelled 15km west to roost between Bodyke and Tulla. Coincidentally, on the very same day, Caimin (the Mountshannon male WTSE) was spotted by NPWS ranger Áine Lynch at Parteen Weir 18km south of Mountshannon and downriver from Killaloe. Over the years we’ve never had either adult this far from their territory. No distance for an eagle for sure but perhaps Aoibheall started her journey once he left? As in 2013 the adult male has shown what a brilliant parent he is.

On 26/11 Aoibheall returned east to roost in Raheen Wood near Tuamgraney on the edge of Lough Derg and next day was back in the nest area where she remained until at least late on 30/11. Although there was a gap in the GPS data over the next two days (due to low light levels resulting in the solar powered battery losing charge), by mid-day on 2/12 she had moved half way up the lake on the Tipp shore before roosting 12km north on the Galway side of the lake. Over the last 10 days she has been exploring the north end of the lake from Dromineer to Portumna (see map of her GPS tracks).

Not only has the GPS data been brilliant at tracking her movements it’s been exciting (and a little nerve-wracking!) to see her first-hand coping so well in the wild. On 5/12 she cruised all round the north end of the lake from Terryglass to Portumna and back, landing for a while on some of the islands. On 10/12 she spent over an hour soaring and hovering into the teeth of a gale. Looking at her she seemed to revel in it. She could have landed at any time but hey, landings for wimps (!), only descending to cover when a big wintery shower hit the lake. At one point she was mobbed by a male Kestrel, looking for all the world like a gnat in her presence. Following that a young Peregrine falcon joined in the fun and began dive-bombing her before heading off south.

It’s going to be interesting to see how long she stays on the lake and whether she returns to base in Mountshannon at any time or just keeps on going.

Bain taitneamh as an tsaoil

Last modified on Friday, 12 December 2014 11:57
Published in White Tailed Eagle blog
More in this category: « Aoibheall getting restless? Star goes AWOL for Christmas! »
back to top