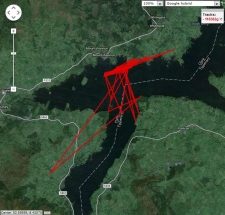 Since she fledged from her nest on Lough Derg on 26 July, WTSE chick Aoibheall has been slowly expanding her range and exploring her environment. She made one trip 9 kilometres south-west to the edge of the Slieve Bernagh mountains in south-east Clare and more recently visited the Tipperary side of the lough. However she still seems keen to return to base most days near Mountshannon where her parents, Caimin (2008 red tag Y) and Saoirse (2009 green tag %) are still no doubt bring her fish. The 2013 chicks left the area on or around the end of September so it’ll be interesting to see how long she stays around. Maybe being an ‘only chick’ she will stay much of the winter, having no competition for food and parents who are still attentive.

The map shows her movements based on satellite data transmitted via the Argos satellite system and is usually 1-3 days behind real time, depending on when it was downloaded.