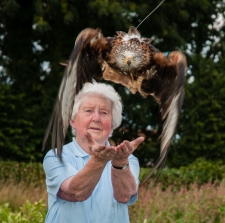 The Dublin Red Kite Blue White B3 has been helped by the amazing actions of Nessie Bergin and north Co. Dublin farmer David Garrigan. Mr Garrigan who initially found the tagged kite in a potato field knew it was from the reintroduction project. He alerted Nessie who was able to deftly capture the red kite and place it in a box for the Golden Eagle Trust volunteers to collect and take to the project vet, Fintan Browne at Anicare Vets (Blanchardstown).

The kite appeared weakened and was clearly in need of some care and very low in weight. It was found a short time some bad of weather and horrendous thunderstorm which may have downed the bird. A few days under Fintan’s expert care and the bird was transferred to aviaries getting lots of food in the form of dead rabbits and crows to speed its recovery.

Blue White B3 was one of the original Dublin kites which was collected in 2011 near Rhayader in Wales with project partners the Welsh Kite Trust on the 12thJune 2011 and released from Newbridge Demesne on the 26thJuly 2011. She has been seen on numerous occasions by the project team at winter roosts since her release over two years ago and had set up a territory earlier this summer.

The 29 pairs of Co. Wicklow kites produced 29 young during 2013 and whilst five pairs were located in north Co. Dublin, none of these were recorded to successfully breed. The Dublin project was initially set back by the loss of nine birds of which six were confirmed to have been subject to accidental secondary poisoning by rodenticides (rat poison).

Dr Marc Ruddock, Red Kite Project Manager said “We were devastated at the initial losses, but we have done considerable awareness raising of the issue and there is extensive support amongst landowners and communities within the area for the birds and we are not aware of any further losses. The Dublin kites are still very young to breed at only two years of age but it is an encouraging sign that pairs have been established – we hope next year, 2014 will see the first Dublin red kite chicks.

Dr Ruddock continued, “We would remind people especially as we approach the autumn when rat populations disperse following harvesting to be mindful of the red kites and other wildlife when using rodenticides”.

Before she was released the project team, under specialist licencing, have tagged Blue White B3 with a satellite transmitter to allow us to follow her progress and movements over coming weeks and months.

The bird was returned to the wild by Nessie who rescued the bird and she said “I have decided to name her Hera who was a goddess of the sky and I hope she finds a good man goes on to have many young red kite chicks in the coming years”.

As Nessie opened her hands to release the bird back to the wild she said “Fly free” and a silence descended over the small group of volunteers and locals as we were all humbled at being part of the process to allow the bird another chance at freedom in the wild.

The Red Kite Project is a partnership between the Golden Eagle Trust, National Parks & Wildlife Service (NPWS) and Welsh Kite Trust and in Dublin was funded by the Fingal LEADER Partnership and the Department of Arts, Heritage & Gaeltacht and supported by KPMG, Fingal County Council, Fingal Conservation Volunteers, Birdwatch Ireland, Irish Raptor Study Group, AOL Monster Help Day and Burren Bird of Prey Centre. The local NARGC also provided all the food for the kites whilst they were in the cages.

The Golden Eagle Trust are grateful for the interest and support of all the residents and farmers of north Co. Dublin for the Irish Red Kite Project and particularly would like to thank David Garrigan, Nessie Bergin, Ciaran O’Keefe, Lorcan O’Toole, Samantha Rhodes, Fintan Browne (Anicare), Trevor Roche (Dublin Falconry), Ciaran Dunne, Derek O’Brien (NARGC), NPWS and British Trust for Ornithology for their help in returning Blue White B3 – Hera – back to the wild. Special thanks also to Paul Kavanagh and Outdoor Studio, Skerries (Eamon & Christine O’Daly) for the photos.