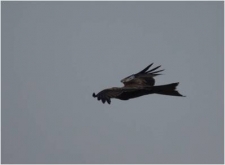 The red kite is now a familiar sight around Wicklow farms and villages. Particularly in Avoca village throughout the year and also where notably large communal roosts occur in the winter. People from near and far have come to see the kites and many are captivated by the sight of the graceful, forked-tailed kite floating and gliding over fields, villages and woods in Wicklow.

Each red kite was fitted with a radio-tag allowing the project team to monitor the birds since release. Each red kite is also identified by wing tags with a unique code and three kites in Wicklow Blue/White E, Blue/White v and Blue/White Z were initially considered missing. All 10 other red kites were regularly radio-tracked each week throughout the winter.

Frustratingly Blue/White E had dropped the radio close to the release cages and had not been seen since September 2011 and whilst the radios had apparently stopped working on Blue/White v and Blue/White Z and neither had been seen since October 2011. After initial fears that these three birds were missing, both Blue/White E and Blue/White v have now both been confirmed alive through photographs taken during the past two weeks. Only Blue/White Z remains unaccounted for, although the radio malfunctioned shortly after release and the bird may still be alive. Amazingly, this represent over 90% survival through the winter of these young released birds.

Whilst three other kites were confirmed poisoned illegally last year by alphachloralose, including one of the breeding adult females, the Wicklow kites have also been breeding successfully since 2010 and have produced 12 young in 2010 and 17 young in 2011. With the additional strategic release of 39 Red Kites in Co. Dublin last year and a minimum of 29 young produced from wild Wicklow nests over the past two years, it is hoped the east coast population of kites is secure and will allow the species to spread across the island of Ireland.

With spring clearly in the air the red kite breeding season is already beginning and some red kites are showing signs of having paired up and building their nests. At this time of year the project team would urge landowners and the public to report sightings of red kites, particularly if you see displaying birds or kites carrying nest material or suspect a nest location. Please also be mindful that kites are vulnerable to disturbance at this time and are considered no threat to livestock. They are known to feed mainly on insects, worms, rats and magpies. All sightings or information should be reported to This e-mail address is being protected from spambots. You need JavaScript enabled to view it or on the project website www.goldeneagle.ie

As part of the celebration this year of the red kites return in Ireland the Golden Eagle Trust are hosting a talk at the Woodenbridge Hotel, Co. Wicklow on 14th April 2012 starting at 1030am. The Golden Eagle Trust project team provide an insight into the project over the past five years and the highs and lows of bringing the red kite home to Ireland.

The event has been kindly sponsored by Wicklow County Council; Deirdre Burns, Heritage Officer with Wicklow Council stated ?The reintroduction of Red Kites to Wicklow is a significant milestone for biodiversity in Ireland. Now that the population has been established, the continued success of the project will rely on the interest and enthusiasm of the local community. This event is an ideal opportunity to find out more about these wonderful birds and how local people can play an active role in ensuring that they remain a common sight in the Wicklow landscape?

Last modified on Tuesday, 06 November 2012 00:05
Published in Red Kite updates
More in this category: « A day out kiting... Spring update »
back to top