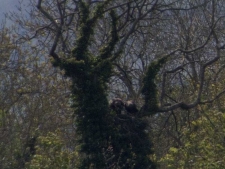 A breeding attempt by a pair of White-tailed Eagles, near Mountshannon, Lough Derg, has unfortunately failed at the point of hatching. The birds started to lose interest in the nest site on Tuesday (16/5/12) evening and did not attend the nest at all on Wednesday (17/5/12). A nest visit yesterday by Golden Eagle Trust and National Parks and Wildlife Service staff confirmed that only egg shell fragments and the remains of a tiny White-tailed Eagle chick staff were left inside the nest cup.

The pair of White-tailed Eagles is still in the nest site vicinity. The breeding female was only three years of age, whereas they normally begin to breed as four year olds. Therefore it is not surprising that she would not be successful in her first breeding attempt, especially before she reached maturity. Whilst the natural breeding failure is disappointing, it nonetheless clearly demonstrates that the Irish landscapes can support these magnificent birds.

Other territorial pairs in Kerry and Galway will hopefully breed next season alongside the Clare pair. The Mountshannon breeding eagles were released in County Kerry as part of the Irish White-tailed Eagle reintroduction programme. The Programme has been managed and developed by the Golden Eagle Trust in partnership with the National Parks and Wildlife Service (NPWS) since the project was first muted in 2006.

The primary funding for this national project has come from NPWS and the Golden Eagle Trust is grateful that NPWS had to foresight to invest and support this imaginative project from the outset. And despite this disappointing news, we are reassured that the initial vision of restoring White-tailed Eagles to Ireland has now begun to become a reality.

The local people, from schoolchildren to senior citizens, came to look at 'their eagles' on a regular basis and the enthusiasm and support was palpable. We believe this pair will now become another attractive part of the Lough Derg landscape. We also take great succour from this ongoing community support for the restoration of native eagles.

Whilst these birds may be breeding in Clare, we should not forget the support of the people of County Kerry who have embraced the 100 young White-tailed Eagles initially released in their midst and have given the project steadfast support since the birds were first released. Their 10,000 strong petition played an important role in convincing the national authorities that there was widespread support in rural Ireland for restoring the eagles to our coasts, rivers and loughs.

Numerous visitors from County Clare, elsewhere in Ireland and abroad have already come to Mountshannon to see the eagles. We estimate that the nest attracted 700-800 people a week. The numerous comments in the visitor book reflect their appreciation for being able to see eagles in the Irish countryside again. The level of interest in the site over the last two weeks would suggest that there is enormous potential for celebrating our wildlife and cultural heritage all along the Shannon Basin.

The pair of White-tailed Eagles is likely to remain on and near Lough Deg over the rest of the summer. People should keep an eye out for the birds as they fly and forage over the rich bays and islands between Whitegate, Mountshannon, Scarriff and the Tipperary side of Lower Lough Derg. The birds may begin prospecting for new nest sites early in the New Year, though it is possible that they could re?use this year's nest.

9 Apr-15 May
Both birds shared incubation over the next 5-6 weeks with female doing the "night shift". Male tended to do more of the daytime incubation in the first few weeks with bouts up to 8 hours without changing over. Closer to the expected hatch date (16-18 May) female attended the nest more than the male. Both birds mostly fed away from the nest while off-duty, but food was also brought to the nest by the male when the female was sitting. All food items identified were fish species but duck feathers were also recovered from nest.

15 May
Female incubating as normal in morning. However two periods when both birds left nest during the day (9 minutes off on 2nd occasion). This was unusual and followed on a change in behaviour over last few days with birds "restless" at nest, standing and re-sitting more often than previously (responding to egg hatching?). Just before 1800 both birds deserted the nest and perched c100m away showing no interest in returning to nest. Female returned to nest later that evening and stood for some time on nest rim before departing again. Birds did not return after this.

16 May
Nest entry to check nest c 1700 hrs. Damian Clarke (NPWS) climbed to the nest. Nest well built and completely intact. Eggshell fragments and wing of chick with inner membrane of shell still attached recovered indication chick died at or around hatching. No evidence of a second egg/chick but almost 24 hours since nest abandoned. Hooded crows observed at the nest earlier in day and likely removed/predated nest contents.

While it was disappointing that the nest failed this was always likely as the pair are young (4th cal year female, 5th cal year male) and first time breeders regularly fail to produce fertile eggs and/or hatch. Clearly this pair laid fertile eggs so mating is not an issue. Throughout incubation the pair rarely left the nest and the experience gained this year should be invaluable on their next attempt. At present the pair is still roosting on the nest island. It remains to be seen whether this pair re-nests at the same site next year.

The monitoring effort at the nest site, during daylight hours throughout the incubation period, could only have been achieved with a lot of voluntary effort including NPWS staff. The nesting and the public nature of the site also generated huge positive interest locally but also attracting visitors from throughout Ireland (c 1,000 over the weekend of 5-7 May). A full-time person (Anna McWilliam) was hired to coordinate the effort for the period of nesting. Mountshannon Community Council and the local FÁS crew as well as Search and Rescue provided much help locally. We are grateful to John Maguire (NPWS) for prompt help re licensing and Damian Clarke for tree climbing and inspecting the nest contents.

Last modified on Tuesday, 06 November 2012 00:06
Published in GET General updates
More in this category: « Sea Eagles nest for the first time in 100 years Was it ethical to Re-introduce Red Kites to Ireland? »
back to top