Sea Eagles nest for the first time in 100 years 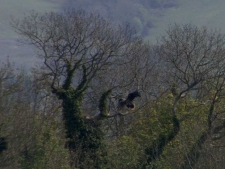 A pair of White-tailed Eagles has been confirmed nesting near Mountshannon, Co Clare, the first documented nesting attempt for the species in Ireland in over 100 years. Nest building began in recent weeks with the birds spending much time in and around the nest site before laying eggs. Although the nest has not been visited to confirm the presence of eggs to avoid any unnecessary disturbance, the behaviour of the birds indicated that the birds have nested. The breeding pair, which settled in the area in early 2011, was released in Killarney National Park, Co. Kerry, as part of the White-tailed Eagle reintroduction programme developed and funded by the Department of Arts, Heritage and the Gaeltacht in partnership with Golden Eagle trust. This is the first known nesting since the reintroduction programme began .

"This is a truly momentous event", said Dr. Allan Mee, project manager for the Golden Eagle Trust. "It seems a long time since we collected these birds as chicks from nests in the wild in Norway and to see them now nesting in the wild themselves in Ireland is the day we have all been waiting for". The breeding pair, a four year old male and three year old female, was collected in 2008 and 2009 respectively on the island of Frøya off the west coast of Norway. White-tailed Eagles are fully mature and usually begin to breed at five years of age but birds in Scotland have very occasionally bred as early as three. "We had hopes that this pair might try and build a nest but because the birds are relatively young we really didn't expect them to breed", Dr. Mee added. "The odds are stacked against young first-time breeders because they have no experience of nest-building, mating and caring for eggs and young. They have to get everything right to succeed. But this pair has impressed us so far. Once they settled down to incubate the clutch of eggs both parents were very diligent. The nest has only very rarely been left unattended and birds have been quick to spot potential dangers such as the presence of hooded crows which might predate the eggs. Since the eggs take some six weeks to hatch they still have a long way to go. But so far so good".

In Norway news of the nest was also greeted with delight. The Norwegian Institute for Nature Research (NINA), one of the Norwegian partners in the reintroduction programme commented: " NINA is delighted to hear of the first breeding attempt of the white-tailed eagle in Ireland for 110 years, and proud to have cooperated with The National Parks and Wildlife Service, The Golden Eagle Trust, and the Norwegian Ornithological Society in the effort which has led to this success. The event is receiving considerable media attention in Norway and we hope the birds will be given the freedom from disturbance they need to maximize the chances of successful breeding. The NINA part of the programme was led by Dr. Torgeir Nygård and Dr. Duncan Halley."
- Norunn Myklebust, Director, NINA

The Minister for Arts, Heritage and the Gaeltacht, Jimmy Deenihan T.D. said:
"I am delighted with this news after years of hard work by many on this project. We are working hard in my Department to protect and enhance our natural heritage and this development is a great boost. Already the White-tailed eagles are a wonderful asset to tourism around Killarney and wider afield in Kerry, and their spread will benefit business as well as giving joy to anglers and naturalists around the Shannon."

Over the past four years White-tailed Sea Eagles have dispersed throughout Ireland and beyond. Many eagles have been reported from Northern Ireland and at least six birds have travelled to Scotland. One male that spend 8 months away from Kerry in 2009 travelled over 2,000 kilometres to the Orkney Islands off the north coast of Scotland before returning to Kerry. In early 2011 this male was found paired with a female in south Kerry. Immature White-tailed Sea Eagles may disperse over a wide area but once birds begin to mature and pair up at 4-5 years old they establish territories along the coast and inland lakes where they are resident throughout their lifetime.

The news of nesting White-tailed Eagles has generated a lot of excitement locally in east Clare and is likely to attract the attention of people keen to see the birds. However disturbance, particularly during the early stages of nesting when the birds are on eggs, would be detrimental to the pair' success. "We are very conscious of the risk of disturbing the birds especially at this stage of nesting. Disturbance could result in the birds leaving the eggs unguarded for a period during which the eggs could be predated or be chilled or the birds could desert the site. White-tailed Eagles are a protected species and it is an offence under the Wildlife Act to willfully disturb birds at the nest during the breeding season. We would caution people not to approach the nest area but instead watch from the viewing area onshore where we will have a telescope for close viewing. Information on the birds, their ecology and conservation will be available. We would like to acknowledge the goodwill and assistance of the local community and Clare County Council before and during the nesting period".

Whatever the outcome of this nesting attempt, the signs are good for future breeding in the area and at a number of other sites across Ireland in the near future. Birds can live for 25-30 years and generally mate for life with adult pairs remaining within their home range throughout the year. First time breeders, especially young birds, often fail at their first attempt. However, with the goodwill and support of local communities the birds should have a bring future.

This is fantastic news for County Clare and reflects the outstanding landscape and biodiversity we have here that can attract such beautiful birds" said Shane Casey, Biodiversity Officer for Clare County Council. "While it' understandable that everyone will want to visit the area and have a look for themselves, its important to remember that this is a very sensitive and critical time for the birds, and as such we need to show some patience and responsibility, and let nature take its course unhindered. We are all hopeful that this story ends in a chick, but we must remember that this is already a success story, and that the first white-tailed eagle egg laid in Ireland in over a century was laid right here in County Clare!

NOTE: White-tailed Eagles are a protected species and it is an offence under the Wildlife Act to willfully disturb birds at the nest during the breeding season.

Their images were drawn on the page margins of early Irish manuscripts, such as the Book of Kells. The decline of eagles in the late 17th century was lamented in the famous Tipperary poem; Caoine Cill Cháis [Lament for Kilcash]

Writing about Irish eagles in his book, 'The Way that I Went'( 1937), Robert Lloyd Praegar stated, "Heaven help the bird that ventures near the 'Island of Saints'".

Now in 2012, we have come full circle. Eagles are nesting once again along the Shannon. The nest is only 2km from the famous Early Christian Monastic site at Holy Island, Mountshannon. Hopefully, the ongoing revival of the ancient co-existence with nature, will see eagles breeding on Ireland's waterways and coasts for centuries to come.

Here are some links to guest houses and information on the area which may be of use for anyone who intends to travel to Mountshannon.

The Golden Eagle Trust Limited need your support to carry out these important and exciting conservation programmes as well as to implement new initiatives. We would be very grateful for any donations from individuals or organisations. Annual sponsorship or indeed one-off donations are very welcome. Donations and sponsorship can be either for the Golden Eagle Trust Limited or for a specific project. You will receive a receipt for each donation received, so that you can claim any appropriate tax relief on the donation.

All cheques or postal orders should be made payable to the Golden Eagle Trust Ltd and sent to our registered address:

Given the Golden Eagle Trust Limiteds track record in species recovery and conservation, your support is guaranteed to be used effectively to benefit extinct and threatened birds.

Last modified on Tuesday, 06 November 2012 00:06
Published in GET General updates
More in this category: « White-tailed Eagle falls out of the Donegal skies! Young WT Eagles abandon nest at hatching time »
back to top