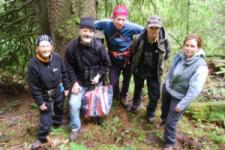 The 5th year of collecting and releasing White-tailed Sea Eagles, to re-establish the species as a breeding bird in Ireland after a gap of over 110 years, went well this summer and all birds are now out there soaring freely in the skies on the south-west and possibly beyond. Collecting the sea eagle chicks began on the islands of Hitra, Froya, and Vikna on 17-19 June thanks to the superb efforts of the collecting team there: our good friends Martin Pearson, Inge Dahlø and Asgeir Øestvik on Hitra-Froya; Bertil Nyheim, Frithof Pedersen and Steiner Garstad on Vikna. In total 12 birds came from Hitra-Froya and 6 from Vikna. Over the next few days (20-22 June) a further 5 birds were collected: one collected by Livar Ramvik and Duncan Halley on the mainland at Snillfjord (this bird is now our sat-tagged male Ingar!); one collected at Byneset near Trondheim by Torgeir Nygard and myself; 2 collected on islands in Flatanger by Torgeir and myself, ably assisted by Ole-Martin Dahle. The final bird, a male chick, was collected from a big Norway Spruce high up above a town on the coast of Norway by Torgeir, Duncan and myself. This was the 23rd bird collected in 2011 and the 100th bird collected over the 5 years of the release phase of the reintroduction programme! And fittingly this last bird was on a big tree with a big nest on the broken top of the spruce with string winds and rain added to the mix! It was a good feeling to collect this last bird but I for one was glad to get down out of there!

During my stay in Norway the birds were again housed in a converted barn in Stjordal and expertly looked after by our good friend, Tom Roger Østeraas. Almost as importantly we were made at home and looked after by Aud and Arne Moxnes. Birds were measured and blood sampled to confirm sex and their health status checked by a vet. We ended up with 15 females and 8 males, a strong bias towards females which is what we aimed for to balance the sex ratio in Ireland. On 25 June I flew from Trondheim to Kerry with the 23 eagles. For once it was raining and cool in Norway but dry and warm in Kerry when we got there. Staff and volunteers from Killarney National Park were in hand to help with transferring the birds safely and smoothly to the flight cages in the park where they were housed over the next few weeks. Birds were tagged and transmittered in late July ready for release. Again, this wouldn't have been possible (or half as fun!) without the help of so many, particularly Damian Clarke and Anne Fitzpatrick (NPWS, Wicklow Mountains NP), Eimear Rooney (Queens Univ, Belfast), John Lusby (BirdWatch Ireland), Barry O'Donoghue (NPWS, W. Cork), Anna McWilliam, Arthur Allen, and Daniel O'Lachlan (Tralee IT).

On 4th August we released the 1st batch of 10 birds with another 10 taking the wing the following week. Our final three held on until 25 August when they were finally ready for release. All releases went pretty smoothly despite the poor weather especially on the 1st and last releases. Minister Jimmy Deenihan attended the 1st release which was almost a no-show because of the weather. The final release was the only one to have a hiccup, partly to do with having to release birds in dodgy weather for a 1st flight. Two of the 3 birds released on 25 Aug didn't make it much beyond the cages on day 1 but thankfully all were flying fine and made it to the feeding sites along the lakes within a few days. Although most birds remained around the Lower Lake over the next month (into mid-Sept) three birds had departed by mid-Aug and have not been picked up by telemetry since. Its likely that these birds are now exploring the country as we speak. Reports have been coming in from west Cork, Clare, Galway, Donegal and Fermanagh but more of that anon.

At this moment most of the 2011 released birds that are still left in the release area (6-12 birds) are to be found in the Long-Range to Black Valley area as well as around Lough Guitane SE of Killarney. Look out for sea eagles on the move where you live, especially along the west coast and along the Shannon valley and report any sightings to me on this website by clicking on Report a Sighting on the home page! Thanks a million!