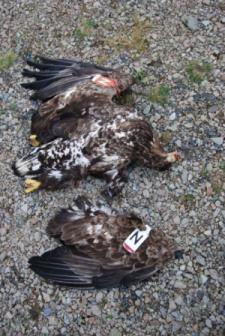 A White-tailed Eagle has been killed in Kerry after being hit by a wind turbine blade. The eagle, a 3 year old female released in Killarney National Park in 2008, was found below a wind turbine at the Silahertane Wind Farm on the Kerry-Cork border south-east of Kilgarvan on 9 March 2011. The strike with the turbine blade severed a wing and fractured a leg. Post-mortem at the Regional Vet Lab, Cork, and toxicological analysis at the State Laboratory, Celbridge, Co. Kildare, revealed very low concentrations of Nitroxinil (Trodax) in the liver but this was considered to be non-significant, probably due to consuming traces of the drug in sheep carrion. This is the first documented mortality of an eagle due to collision with a turbine in Ireland. There have been no documented deaths due to turbine strikes of Golden Eagles or White-tailed Eagles in the UK to date although eagle collisions with turbines have been widely documented in Europe and USA and red kites have been killed by turbine strikes in Scotland.

?It is sad to lose an eagle in this way,? said Dr Allan Mee, Project Manager of the White-tailed Eagle Reintroduction, ?especially as this three year old female would have been one of the first birds from the release programme to form the nucleus of a breeding population. We were unaware of any birds roosting in the area of the wind farm at the time. The nearest roost to the wind farm is only 1.5 kilometres away and had been used regularly by eagles during late 2009 and early 2010 and occasionally since then. The risks are probably greatest when birds begin to leave the roost and use the slopes to gain height during which time they are flying low enough to fly through the wind farm. Interactions with other eagles such as chasing and displaying could also increase the risk from turbine strikes as birds may be largely unaware of any risks from collisions during such interactions, as has been suggested by studies at Smola, in Norway?.

Over the next few years it will also be important to assess how much White-tailed Eagles use the existing windfarms and whether they avoid windfarms to any extent. We will also work with wind farm operators to help reduce the risks of further collisions where possible. Despite the loss of this eagle to collision, it should be borne in mind that mortality due to poisoning has been by far and away the greatest threat to eagles and other scavenging birds of prey in Ireland and indeed in the UK. Over the past three years 9 White-tailed Eagles have died due to poisoning alone. Seventy-seven White-tailed Eagles have been released in Killarney National Park since 2007. To date 16 sea eagles have been recovered dead, 9 have died due to poisoning alone, the greatest mortality threat to the species reestablishment.

Collisions, such as flying into powerlines or being hit by trains, are also a serious risk to large birds of prey. In Germany collisions with trains are one of the most significant causes of accidental death of White-tailed Eagles. In Scotland at least two reintroduced White-tailed Eagles have been hit by trains while two reintroduced Red Kites in Wicklow have also been killed in this way where they were attracted to railway lines to scavenge on pheasants killed by trains. Studies in Hungary have also shown that 40,000-170,000 birds are killed annually by electrocution with 36% of the victims being raptors, including 42 Imperial eagles recovered dead between 2001 and 2009. The cumulative effects of anthropogenic (man-made) mortality factors such as poisoning, collisions, electrocution and turbine-strikes, has serious implications for the viability of raptor populations, particularly raptors such as eagles that have low reproductive rates.

Last modified on Friday, 09 March 2012 10:51
Published in White Tailed Eagle blog
More in this category: « Sea Eagles in Kerry and beyond 5th batch of Sea Eagles released in 2011 »
back to top