Sea Eagles in Kerry and beyond 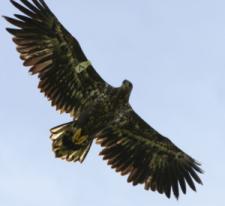 Well its lashing rain in south Kerry on the "first day of winter" with any self respecting eagle likely to be keeping his/her head down and weathering the storm in the hope of better days to come! We've had some glorious days in October but the weather has definitely taken a turn for the worse alright. During October, apart from a few individuals, most 2010 released eagles have been largely resident in the Killarney valley, especially the Upper Lake and Long Range areas. Despite the fact that we stopped supplementary feeding in early October the class of 2010 has been slow to get the hint and disperse. The exception has been blue tag male 3 who has been all over the south-west coast. On the last blog I mentioned that he was missing until spotted and photographed soaring around the cliffs of Blananarraguan, the iconic sea-watching point on the westerly tip of Cape Clear Island, on 18 September by Dick Coombes. He was also seen on Three Castle Head just north of Mizen Head on 22 September. Blue 3 was then seen regularly on Dursey Island on the tip of the Beara peninsula in late September and early October (D. Cooke, K. Grace). Other sightings of WTSEs in west Cork may have included male 3 including 2 birds at Lissagriffin near Mizen Head on 19 October. Unconfirmed reports were of two birds fishing on Lough Allua near Ballingeary, Co. Cork, in mid-October and 6-8 birds over nearby Shehy Mountain in late October.

Other interesting reports away from Kerry were 3 birds west of Oughterard, Co Galway, on 24 September and 2 there on 1 October (inc 2009 male Rbar), and one at Upper Lough Erne, Fermanagh, on 6 October. A tagged WTSE was also reported from Ballycotton, Co Cork, on 27 September. Other reports have been birds at Pollardstown Fen, Kildare, on 19 October, at Portumna Forest Park, Lough Derg, Co. Galway, on 24 October and near Ballieborough, Co. Cavan, on 28 October.

Perhaps the most interesting record was for 2008 male K. Male K had been frequenting the Dingle peninsula in March but was spotted in the lake country west of Oughterard by NPWS ranger Aonghas O'Donnell in May. On 7 October Brendan Dunlop of the Northern Ireland Raptor Study Group, picked up a signal for K from the NE Antrim coast looking straight across the 20km of sea to the Mull of Kintyre, Scotland! Its likely K had been some time in Scotland and may have been on his way back to the shamrock shore after a sojourn with his Scottish cousins. K is the fourth definite record of an Irish WTSE in Scotland but it's likely that several others have been to Scotland undetected. Brendan & Marc Ruddock also got to grips with 2009 male < in NE Antrim on 18 September (see photo).

Good news to report on Ollie, yellow tag 2007 male. In the last blog I mentioned that hehad lost his 'mate', red tag 2008 female dot, who disappeared in early May. Thankfully she is back in Kerry and the two have been hanging out along the Iveragh coast and Lough Currane. One of my most memorable days tracking eagles so far was on a flat calm evening in late October with the sun setting over the Iveragh coast and the loud yelping calls of female dot echoing across the bay from her perch on a big tree (close enough to see her calling!). Nearby Ollie seemed unsure whether his summer of solitude wasn't all that bad after all! Girls, can't live with 'em, can't live without 'em!

Another bird to return to Kerry was yellow tag 2007 male 1. He was seen in Kenmare Bay on 30 September and joined by 2007 female X. Since then he has been seen on his own and with 2008 female T. It will be exciting to see if any of these birds begin to pair off over the winter and maybe attempt to nest in 2011. Fingers crossed!

As you will have read from the Red Kite project update Damian Clarke has defected back to the National Parks & Wildlife Service. Damian, your wit and repartee will be sadly missed:-( Seriously though, Damian has done a great job on the kites, not to mention his many side projects on buzzards, peregrines, ravens and nightjars. I'll be calling on his tree climbing expertise among other things in the future! And of course kites will still be a part of his work with NPWS for many years to come.

PS: Hope ye are all enjoying the Eagles Return series on RTE. Congrats to John and Cepa at Crossing the Line and the many cameramen including Mick O'Rourke, Ross Bartley, Gabe (???) and Dom Pontillo. It was a long time in the making and gives a good insight into the reintroduction projects, the good days, bad days, hopes for the future and the threat to the future of Irish eagles and kites from poisons.

Last modified on Friday, 09 March 2012 10:51
Published in White Tailed Eagle blog
More in this category: « Latest Sea Eagle news and where to find eagles in Kerry White-tailed Eagle killed in collision in Co Kerry »
back to top