Star gets celeb status in Maugherow! 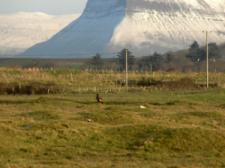 Almost 6 months after his release, male Star continues his love affair with the Sligo coast. Released on 7 August 2009 Star soon began his wandering moving east into Co. Cork, then north into Co. Limerick, before following the River Shannon all the way from Limerick City to Lough Allen. Star made it to the Sligo coast on 22 August, 280 km NNE of his release site in Killarney National Park. Over the next 10 weeks Star took up residence along the coast from Mullaghmore-Streedagh feeding on diverse prey and carrion from gulls to beached dead seals. He made his first move south on 3 November to Lissadell before crossing Sligo Bay on 7 November.

Over the next two weeks Star hung out in the Skreen area west of Ballysadare Bay, mostly frequenting coastal farmland. Unfortunately (or fortunately) Star was picked up in bad condition on 16 November by a local man and taken into care at the raptor centre at Eagles Flying near Ballymote. First impressions were that the bird was hypothermic and might possibly have succumbed to Alphachloralose poisoning, a narcotic poison used mainly to kill crows and which causes death by lowering the body temperature. However, tests were negative and so other possibilities were considered. When Star was found his feathers were apparently saturated and he appeared unable to fly. The previous few days had been very wet and extremely stormy. One possibility was that Star had been in poor condition, was struggling to find food, and extremely wet conditions could have resulted in its debilitated state. However, five days after being found (21 Nov) he weighed 5.2 kilos, a good weight for a male Sea Eagle, which suggests that food was not an issue. Another possibility was some form of oiling. On examination it was clear that Star's body feathers were in poor condition and had an oily feel. Given that Star had previously been seen eating gulls, and fulmars were still common on and near coastal cliffs, oiling by fulmars could have occurred. In fact oiling of Sea Eagles by fulmars has been previously documented. Here is what John Love had to say in his book The Return of the Sea Eagle (1983): "Several of the Rum eagles also leant to catch both gulls and fulmars in flight, the latter seemingly possessed of a suicidal curiosity! Fulmar chicks may be approached as they sit on the nest ledge but the eagle renders itself liable to being spat upon. This foul oily liquid proved the ultimate undoing of one of the Fair Isle eagles." In Scotland today, fulmars are the single most abundant bird item in the diet of Sea Eagles but they may occasionally pose a threat by oiling especially to naive young Sea Eagles.

Star made his return to the wild on 26 November after being released back into the wild. On 22 December he moved back to Maugherow-Lissadell, the 'peninsula' on the north side of Drumcliffe Bay, Co. Sligo. Over the last month Star has been resident in this area where he has become something of a local celebrity as he is often to be seen perched on fence-posts in farmland or flying along the coast. Over the last 2-3 weeks Star has also been spending all or part of the day on offshore islands. Although these islands hold some bird populations even in winter, he may have also discovered a seal carcass or two. The Maugherow-Lissadell area is also home to over 3,000 Barnacle Geese (3,930 in spring 2008, almost a third of the Irish wintering population) which visit the area in winter from their breeding grounds in Greenland. Despite these numbers Star is no threat to the goose population. Apart from being outnumbered 3000/1 (!) barnacles are way too large for the average eagle although weak or injured birds might be of interest. So far we have had no evidence of any interaction between Star and the geese either from personal observation or those of local people. Of greater interest to Star is likely to be rabbits found along the shore. Livestock carrion (dead animals), although important for eagles in the uplands especially in winter, is unlikely to be found in the area. Dairying, dry cattle and sheep rearing are the main farming methods in the area, with lambing indoors and lambs left out at a month old. In the last week I called to local farmers to talk about Star and to hear if they had any concerns. It was great to see the interest farmers had in the bird and feel that farming and conservation can work together. Local schoolchildren are also much enthused about the celeb eagle and I hope to take them out to look for Star soon.

Much thanks must to the following people who have looked out for/after Star in Sligo: Micheál Casey, Pedro Soltani, Kieran Kennedy, Lothar Muschketat, and Ulrike Schwier.

Follow Star's progress on this site by clicking on GPS Data & Maps, then Search Data and Select male Star. Regular updates and photos are also likely to appear on the Sligo birdwatching website at www.sligobirding.com