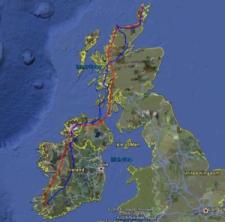 After 8 months away from Kerry satellite tagged male L finally returned to Killarney in time for Christmas! Male L's epic trip had taken him 1,000 kilometres away to the Orkney Islands off the north coast of Scotland. At one point L was only 450 km from the coast of Norway, over two-thirds of the way back to its country of origin from Kerry!

Male L's trip began on 20 April when he left Killarney at 1200 and travelled north all the way to Co. Sligo, roosting on the shore of Lough Gill just E of Sligo Town. L had covered 260 km in about six hours, an average of 40 km/hour all the way. On the 22nd L headed north again across Donegal Bay and into the Bluestack Mountains in south Donegal. L remained in the Bluestacks for much of the following month, apart from a short trip to the Inishowen Peninsula on 30 April roosting later that day in Glenveagh National Park less than 4 km from an active Golden Eagle nest. Next day L moved a few kilometres NW, and to the coast at Ballyness Bay near Gortahork on 2 May, before heading back south to the Bluestacks. On 19 May L moved NE then east into Northern Ireland roosting that night along the Lower Bann River 9 km SSE of Ballymoney. Next day L again moved east roosting in Ballypatrick Forest 5 km from the Antrim coast. On 21 May L made the short 20 km sea crossing from Antrim to the Mull of Kintyre, Scotland, between 0800-0900. Next day L moved north through Kintyre and Argyll inland from the west coast, roosting in Glen Shiel (200 km NNE of its roost the previous night). On 23 May L moved NW to Loch Carron on the west coast before roosting in the hills nearby, 38 km N. L remained in Glen Carron all next day before heading N to Loch Maree and Loch Ewe, then east along the coast and N through Assynt before roosting on the Kyle of Durness on the north coast of Scotland.

On 25 May L moved east to Loch Eriboll, then east along the north coast into Caithness the next day. L remained in this area until crossing the Pentland Firth on 28 May to Hoy, Orkney, then north to roost on the island of Rousay. Next day L headed N to Westray, one of the most northerly of the Orkney Islands, before retracing his route south to roost on Hoy. On 31 May L crossed back to the Scottish mainland roosting near Dunnet Bay before heading back west on 1 June to the Kyle of Durness where he remained for the next 4 months. During this time L roosted primarily in a small cove on the west side of the Kyle occasionally visiting the north coast as far as Cape Wrath, probably visiting the large seabird colonies along the coast. This area does not hold any breeding Scottish Sea Eagles as yet but whether L spent much or all of these months alone or interacted perhaps with other wandering immature Sea Eagles is unknown.

On 21 September L began his first move away from his summering area, heading SSE to Loch Hope, Strath More on 22nd, then SE to Altnaharra near Loch Navar on the 23rd. L moved a short distance SE to Loch A Choire where he remained on 24-25 September before moving further south over the next few days to Ardgay on the Dornoch Firth where he remained until 7 October. L moved SW to Glen Orrin west of Inverness on 9 October, remaining in this area until the 15th when he headed SW to Glen Cannich. The next day L moved to the west coast at Loch Alsh east of Skye before heading south to Knoydart and Loch Morar. By the 19th L was on the Isle of Mull where he appeared to roost near Loch Ba before moving on south to the Isle of Jura and Islay on 21 October. L remained on Islay until at least 11 November but was next located two days later near Ramelton in north Donegal. After 5½ months male L was finally back in Ireland!

By 15 November L was at Lower Lough Erne, Co. Fermanagh, then near Manorhamilton, Co. Leitrim on the 23rd, and near Lough Ree on the 27th. L continued slowly winding his way south along the Shannon roosting in E Galway 9 km NW of Banagher on 3 December. As this was a short time after major flooding in E Galway and elsewhere along the Shannon it?s likely that L found abundant carrion such as drowned livestock along the way. A week later L was just 9 km further south but had reached Lough Derg near Portumna later that day (10th). By the 15th L was near Scariff, Co. Clare, on the west side of L. Derg, and on the Maigue River north of Adare, Co. Limerick on 17 December. By 1300 on 22 December L was back on Lough Lein, Killarney NP, roosting that night in Glena Bay (although it is likely L was back in Kerry by at least the 18th as GPS or Argos fixes were very irregular due to low light levels in winter).

Male L's epic trip is, to my knowledge, the longest yet recorded for any White-tailed Sea Eagle reintroduced to Ireland or Scotland in the past 34 years (reintroductions began on Rhum, Scotland, in 1975). Although the distance at the furthest point (Westray, Orkney Islands) from the release site at Killarney was 910 km, the minimum distance covered during the trip (not including daily local movements during largely sedentary periods such as May in Donegal and June-September in N Scotland) is estimated at over 2,700 km! It will be interesting to see what male L does now he is back in Kerry and whether he will head off on another big trip in 2010!!

Last modified on Friday, 09 March 2012 10:46
Published in White Tailed Eagle blog
More in this category: « What's going on with White-tailed Sea Eagles? Star gets celeb status in Maugherow! »
back to top