White-tailed Eagle falls out of the Donegal skies! 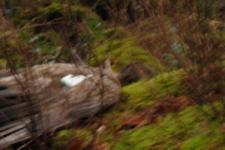 The following extraordinary incident took place in Glenveagh National Park on Sunday 8th January 2012. A group of 15 walkers from Derry City were walking down the glen along the Glenveagh Bridle path on Sunday afternoon. They were about a mile from the Glenveagh Castle Tearoom, walking along the vehicular track, secured by boulders along the Lough shore, in an area known as the Long Hollow.

They heard some commotion and 'rushing' sound above them in the skies. As they looked up, they saw an eagle crashing through the nearby bare Oak tree branches and ivy. It landed on a large moss covered granite boulder. They were able to walk close to the bird and take the above photograph. Though the picture is somewhat fuzzy, due to excitement, you can see the white plastic tag on the right wing and the green colour bar at its base - denoting a green wing tag on the left wing. The letter F is reasonably distinct. Its Satellite tag and short antenna is visible on its back also.

The Satellite tag on this White tailed Eagle, Fiadhna (White/Green F), has allowed Allan Mee follow her as she visited many parts of the island of Ireland over the last year; including Counties Antrim, Derry, Tyrone, Armagh, Louth, Longford, Tipperary, Kerry, Clare, Galway, Kilkenny, Carlow, Wicklow and Sligo. She is quite a remarkable bird. She has been all over Donegal since May 2010 - especially West Donegal.

However, because its Satellite tag signal seemed to come from the same location for several consecutive days, from above Dunlewey, on the edge of Glenveagh National Park, we had searched for a dead bird or a dropped Satellite tag on the hillside between Christmas and the New Year. We were beginning to think she may have been scavenged once we could not find the corpse or tag, near its last know GPS location.

But obviously its tag had simply stopped working, as it is still attached to the bird. The very poor solar activity recently, i.e. continuous rain, may have drained the battery power and the solar cells may reactivate in due course.

Anyway, the group could see the bird's eyes were still blinking as it lay on the mossy boulder. Unbelievably, the bird landed only 12 metres from the main Glenveagh track. The walkers made their way to Glenveagh Castle and returned with Pat Vaughan, from the National Park and Wildlife Service, within 30 minutes. There was no sign of Fiadhna despite a thorough search of the vicinity. A subsequent search of all the neighbouring boulder scree and surrounding woodland on Monday 9th January found no trace of Fiadhna either.

We can only presume that Fiadhna was somehow stunned and fell to the ground, only to recover and fly away soon afterward. What could have caused her to drop out of the sky and then recover? This White tailed Eagle was within the territory of the breeding pair of Golden Eagles in Glenveagh National Park. The only reasonable guess we have is that the White-tailed Eagle was simply dive bombed by a territorial Golden Eagle (presumably the female ? from Assyant, Sutherland ? a hardy bunch!) and struck in mid air, by closed talons and fell to the ground as a result. This may account for the commotion heard overhead, but not seen, before the eagle crashed through the treetops.

Anyone, who has witnessed, heard, and almost felt, the 'swoosh' of air from a nearby plummeting eagle in the skies above will vouch for this truly remarkable sound and memorable feeling. Another couple of walkers in the Park saw a Golden Eagle soaring along the ridge, further up the Glen, a short time afterward. The territorial female Golden Eagle was also seen patrolling the valley skyline the following day, Monday.

Fiadhna was noted being actively chased and harried by the Golden Eagle pair in the middle of last year's breeding season. Now that the winter evenings are stretching, the Golden Eagles will begin to assert their territorial claims more actively. We do presume that Fiadhna managed to fly away after her ordeal and we will be keeping an eye out for her in the Derryveagh Mountains over the coming weeks. We are relieved to know that she did not die on a hillside above Dunlewey.

As for the Golden Eagle, it does suggest that this pair of released Golden Eagles have not lost any of their aerial prowess and aggression during the release process. In due course, it is likely that the White-tailed Eagle population will gradually begin breeding along the western seaboard of Ireland and elsewhere. Whilst this is quite an exceptional incident, it is somehow encouraging that the ancient competition between White-tailed Eagles and Golden Eagles, on the margins of their preferred habitat niches, is once again playing itself out above the Mountains and Loughs of Ireland.

Stop Press + + + On Friday 13th January 2012 Fiadhna's Satellite Tag started giving signals again after recharging, probably during a couple of bright spells of sunshine, in Donegal, during the middle of the week. She was recorded near the head of Glenveagh, over 2km from the incident lower down the Glen. On Saturday, a local lady saw a White-tailed Eagle perched on a telegraph pole, near Lough Barra, another few Kilometres away. So it does appear that Fiadhna was merely stunned and recovered quickly from her fall and flew away. + + +

Last modified on Sunday, 11 March 2012 11:40
Published in GET General updates
More in this category: « Return of an Irish Legend Sea Eagles nest for the first time in 100 years »
back to top