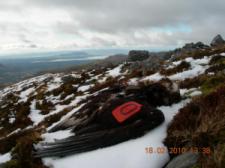 A healthy young Irish Golden Eagle has been found poisoned on the Sligo/Leitrim border at Truskmore Mountain. The 10 month old eagle chick was born and reared in a Donegal eyrie in 2009. The bird had spent the last four months wandering the beautiful mountains above Glencar Waterfall, Lough Gill and Gleniff.

The bird was tracked and found using a Global Positioning System satellite transmitter fitted on its back. The corpse, recovered on the 18th February 2010, was just inside the County Leitrim border. A post mortem carried out by the Regional Veterinary Laboratory in Rathcormack, Sligo revealed that the young male was in excellent condition prior to its death. Toxicology analysis, carried out at the Ashtown Food Research Centre, Dublin 15 prove that the eagle was poisoned by Nitroxynil poured over the fleece of a dead newborn or aborted lamb. Nitroxynil is found in Throdax, which is a veterinary medicine used to treat liver fluke in livestock. New born lambs are not treated for liver fluke. Initial surveillance suggests that no local farmer has any new born lambs outdoors at present. Gardaí in Sligo Town have begun their investigation.

This male eagle was named Conall after "Tír Conall" - the Irish name for Donegal. Local people and children in Donegal, Sligo and Leitrim had been watching and following its regular movements on the project website (www.goldeneagle.ie).

Prior to the 2009 lambing season another satellite tagged Golden Eagle was found poisoned with Paraquat on the 19th February 2009 in West Donegal. The loss of up to 10% of Irish Golden Eagle population within a year suggests that the Golden Eagle Project could fail, unless the unlawful use of toxins by a small percentage of farmers ceases. In total, nine White tailed Eagles, Golden Eagles and Kites have been confirmed poisoned in Ireland over the last two and a half years. Recent monitoring by the Golden Eagle Trust proves that poisons, such as Alphachloralose, Carbofuran, Paraquat and Nitroxynil, have been used illegally in Munster, Ulster, Leinster and now Connaught.

The Golden Eagle Trust believes that over 95% of landowners across Ireland do not use poison. It is also clear, from the 11,000 comments, on the Golden Eagle Trust?s anti-poisoning petition (see www.goldeneagle.ie), that the illegal use of poisons is condemned across both rural and urban Ireland.

Despite previous banner headlines and widespread public revulsion at previous poisoning incidents there has had no discernible impact on the arrogant and selfish poisoners who continue to break the law. The Golden Eagle Trust has come to realise that only peer-group pressure from within the farming sector will dissuade poisoners from carrying on this needless and indiscriminate method of controlling foxes and crows. The Golden Eagle Trust lodged a formal complaint with the European Union in late 2009 concerning the failure of the Irish Government to implement legislation protecting Ireland's rare scavenging birds of prey.

We believe that the Department of Agriculture, Fisheries and Food need to state unequivocally that the poisoning of any Annexe I bird of prey (such as eagles and kites) is a breach of the Cross Compliance measures, which are a pre-condition of the Single Farm Payments they distribute. Could the Department consider adopting a protocol, whereby immediate farm inspections of all flock owners take place within a radius of 5km of any proven poisoning incident ?

The Irish Agri-food sector, which employs 160,000 people in Ireland, now needs to grapple with the glaring contradiction which exists, between the highly lauded promotion of Irish food as quality produce and the emerging evidence of the ongoing highly damaging illegal use of toxins among some non compliant farm food producers. Do Bord Bia believe that the increasing stain of poisoning within Ireland's farm food systems is beneficial to the promotion of 'natural and green Irish farm foods' abroad?

Unlike the more prosperous farmers in parts of Leinster and Munster, farmers on the western seaboard are more heavily involved in the wider rural economy in order to bolster their meagre annual income. The consequences of using poison on meat will create an uncomfortable impression on potential tourists wishing to visit a relaxing and natural area of such scenic beauty as Leitrim and Sligo and thereby curtail the potential for the off farm income of local farm families.

We are genuinely despondent that 10 years of active awareness measures, liaison with farmers and schoolchildren and the production of a poisoning advice leaflet for farmers, agreed with the main farming representative bodies, has been effectively destroyed by a recent edition of the Irish Farmers Journal. The Sheep Section, within the Irish Farmers Journal, advised sheep farmers that "Alphachloralose placed in a dead lamb or the afterbirth can help trap foxes." [Farmers Journal, 6th February 2010, see here]. This appalling advice on the unlawful use of fallen poisoned livestock, is indicative of a glaring disregard for regulations within a small sector of the Agricultural community and more crucially within the main weekly voice of Irish farming.

Lorcán O Toole from the Golden Eagle Trust said, "This issue is about the illegal use of poison within Irish farming. We believe the few hundred farmers using poison illegally are at variance with the huge environmental advances Irish farming has undergone over the last ten years. We have always fully acknowledged the support and co-operation of the sheep farming community in the Northwest and continue to do so. But unfortunately the poisoning this Golden Eagle, undermines the image of Irish food and weakens the potential for local tourism and damages the fragile rural economy in the Northwest, we believe."

"Increasingly, farmers in Ireland will look for support from the ordinary Irish consumer to support their efforts for more sustainable prices for farm produce and in maintaining the crucial farming presence in rural Ireland after pending reforms to the EU?s Common Agricultural Policy. Farmers need to question whether the actions of a tiny minority could undermine that consumer support."

O' Toole added, "Farmers in Donegal bear witness to the fact that eagles can readily co-exist with sheep farming. We believe that ordinary people across Ireland expect Irish Agriculture to co-exist with Nature. Is our green nation so timid, so tame and so weak that we cannot tolerate several pairs of Wild Golden Eagles ? If Golden Eagles become extinct in Ireland for the second time in little over a century, then this small charity can only but apologise for imagining that free flying Eagles, in this new Millennium, would encounter a society that broadly re-embraced the ancient Gaelic respect for Wild Creatures."

Last modified on Friday, 09 March 2012 17:31
Published in GET General updates
More in this category: « Fears over Springtime Poisoning Incidents Eagles and Kites killed in spate of poisoning »
back to top