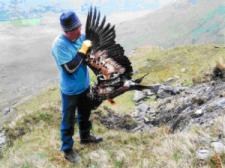 In 2009, 1 Golden Eagle, 1 White-tailed Eagle and 1 Red Kite were found poisoned, with three different toxins in 3 separate provinces during the springtime. There was widespread public dismay and national, and some international, media concern regarding these incidents. The Scottish Authorities called for a detailed review of the Golden Eagle donor stock licence for the Donegal project as a direct result of the confirmed poisoning near Glenveagh National Park. The Irish Government repeatedly promised at the time, that a legislative change would be introduced all but banning the use of poisoned meat baits, outside exceptional licensed exemptions. This small legislative compromise, still allowing for the use of non-meat baits according to the existing poisoning regulations, has still not been introduced.

Now almost twelve months later and nothing has changed since last year. The White-tailed Eagle Steering Group in Kerry has produced a leaflet, with the support of the Irish Farmers Association, Teagasc, the Department of Agriculture and local Gun Clubs asking people to improve aspects of livestock and game protection, to avoid the use of poison meat baits, and only use alternative poison baits or control methods as a last resort.

However, even these few simple conditions are not being adhered to and the use of poison continues with dire consequences for wildlife, farm dogs, pets, and potentially human health. The GET submitted a formal complaint to the EU Commission, in December 2009, contending that the Irish Government are in breach of the 1979 European Union Birds Directive. Primarily, the current legislation in Ireland permits Foxes to be poisoned with meat baits (and crows and Magpies with non-meat baits), without adequate safeguards to prevent the inevitable poisoning of birds of prey (including Annex 1 species). This is in contravention of Articles 4 and 9 of the Birds Directive, because clear alternative and discriminate control measures are available. In addition, the Department of Agriculture, Fisheries and Food fails to ensure that farmers, who are in receipt of direct payments (Single Farm Payment and Rural Environmental Protection Scheme) under the EU Common Agricultural Policy, comply with the Cross Compliance Policy and that they duly implement the Statutory Management Requirements in respect of the obligation not to harm Annex 1 birds of prey (which are protected under the Birds Directive).

In April 2009, the GET set up an online Anti-Poisoning petition on its website, www.goldeneagle.ie . In June, Dublin Zoo put out a hard copy of the petition in their visitor area. The petition has now closed and over 11,000 people have formally signed and requested the Irish Government to ban the use of poison meat baits. Over 7,619 people signed the online petition and 3,424 people signed a hardcopy of the petition in Dublin Zoo. People from over 60 countries have signed this petition, with special support for the change also coming from people in Britain, Germany, USA and France. So this issue is much greater than a mere national problem - people internationally are aware of our shortcomings in this area. The comments of those signatories are noteworthy and the general abhorrence of poison, as a form of control of large mammals and birds, is clear.

Lorcán O' Toole of the Golden Eagle Trust, said, "We have been writing to different individuals, at different levels within the relevant Government Departments for over 10 years now, requesting simple legislative changes that will not discommode any person using poison in a responsible manner. But despite continued promises and genuine aspirations within the Statutory Authorities it appears as if some unidentified issue or bureaucratic problem is stymieing the push for legislative change. Reluctantly, we feel obliged to protect the public funding in these national restoration projects by making this formal European Complaint, which is geared at bringing this underlining tension to a head and getting these changes adopted, either through regulations or legislation, and past whatever internal Departmental blockages that there are."

O Toole added, "It is very clear from the comments on our website petition that people are fed up with the lazy and reckless use of indiscriminate poison. It is also clear from these same comments, and the GET would like to endorse these views, that the vast majority of people in rural Ireland and within the farming sector are fed up with the illegal use of poison and the negativity it produces. We believe that very simple changes in legislation and in Departmental advice and practice could satisfy the points raised in the European Complaint and thereby bring clarity to a rather complex issue."

Last modified on Friday, 09 March 2012 17:30
Published in GET General updates
More in this category: « Poison Killing Birds of Prey Across Éire Poison kills Golden Eagle "Conall" »
back to top