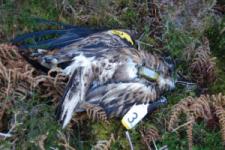 Efforts to restore Ireland's lost birds of prey have suffered more losses due to poisoning. Results from toxicology tests carried out at the State Laboratory in Cellbridge, Co. Kildare and at the SASA (Science and Advice for Scottish Agriculture) Laboratory in Edinburgh, Scotland have confirmed that a White-tailed Eagle, recovered dead, on 12th March, near the shore of Lough Lein, Killarney was poisoned with Carbofuran and a Red Kite found dead near Tiglin, County Wicklow, on the 16th March, was also confirmed to have been poisoned with Alphachloralose. These two deaths follow closely on the recent finding of a Golden Eagle, poisoned by Paraquat, in Co. Donegal on 19th February 2009. The fact that three separate poisons were used to kill three different species, found in three different counties, shows the full extent of the threat that poisons pose to Irish birds of prey. Clearly the unlawful use of poisoned meat baits is, unfortunately, still a countrywide practice.

The poisoned bird in Kerry is the fifth White-tailed Eagle, from the batch of 15 birds released in Killarney National Park in August 2007, to have been poisoned. The White-tailed Eagle that was killed was well traveled and was regarded as a flagship bird of the project. In September 2007, it visited the Blasket Islands and the Skelligs after its release and thrilled boatmen and tourists alike. Although it spent its first winter in Kerry, it spent last summer around Lough Neagh in Northern Ireland, before returning to Killarney in September 2008. Despite surviving all these travels, across numerous counties and over scores of Irish farms, it met its fate just a short distance from where it was released. It had apparently ingested part of a sheep carcass laced with poison.

The Golden Eagle poisoned in Donegal had eaten meat bait laced with Paraquat. Paraquat is a lethal weed killer, with no known antidote, and unfortunately has killed several people in the past. It is totally unacceptable that a substance, known to be poisonous to humans, should be left out in grazing areas and fields containing sheep and other animals. Scottish Natural Heritage, the statutory conservation authority of the Scottish Government, has called a full review of the Irish Golden Eagle reintroduction project export licence, which allows donor stock to be collected in Scotland, in light of this recent poisoning incident.

The Golden Eagle Trust and BirdWatch Ireland are calling for an urgent review of the laws governing the supply, storage, use and mis-use of poisons and the enforcement of these laws and regulations. Recent changes in legislation by the Department of the Environment, Heritage and Local Government, in January 2008, prohibits the use of meat baits in the control of birds. But the Department of Agriculture, Fisheries and Food's Protection of Animals (Amendment) Act 1965 still allows, in certain restricted circumstances, the use of poison on meat baits to control foxes.

This legislation has been now been proven to be clearly in breach of Article 4 and Article 9 of the EU Birds Directive, which specifically protects Annex I species such as eagles and kites. The Golden Eagle Trust will be lodging an official complaint with the EU Commission in this regard within the coming weeks. Sadly, even the limited legislation that is currently in place controlling the use of poisons is itself not being enforced. Regulations governing the use of poison clearly state that people using poison must erect poisoning signs and notify the local Garda Siochana Station in writing - this is simply being ignored. Several of the dead birds ate poisoned dead livestock even though it is illegal to knowingly leave dead livestock above ground under separate Animal By-products regulations.

There are 160,000 jobs in the Irish Agri-food sector, which benefit from the 'clean green' image which our country and food industry has. If this sector is to consolidate its share of an increasingly competitive international consumer market then it must continue to adhere to the highest farming standards. Under the Single Farm Payment Scheme there is a requirement for farmers to comply with a number of Statutory Management Requirements set down in EU Directives and Regulations, including the Birds Directive, which affords rare Annex I species (including Eagles and Kites) special protection. The Single Payment Scheme in Ireland is fully funded by the EU and European taxpayers. The illegal use of poison on a small number of Irish farms is not compatible with the obligations those in receipt of the Single Farm Payment have or with the promotion of Ireland's clean food image.

The Rural Environment Protection Scheme (REPS) is one of the main expenditure items of the Department of Agriculture, Fisheries and Food Budget, and it is estimated it will cost several hundred million Euros in 2009. The Golden Eagle Trust has made two previous submissions, under periodic REPS reviews, stating that poisoning with meat baits be banned on farms in receipt of payments specifically designed to protect the Irish Environment. We would appeal to the Department of Agriculture, once again, to consider this as a matter of urgency. Is it acceptable that a small number of landowners in receipt of payments under the Rural Environment Protection Scheme and Single Farm Payment continue to use poisons that kill protected and rare birds?

The economies and employment in Kerry, Donegal and Wicklow are each heavily dependent on tourism and each county rightly promotes the beauty of their respective landscapes. Golden Eagles, White-tailed Eagles and Red Kites are increasingly being used to highlight each county's wild landscapes in essential tourism promotional packages. It is known for example, that the Eagles on Scotland's Isle of Mull alone, contribute 3 million euro per annum to this small island economy. Each Irish county has the potential to replicate these specific eco-tourism incomes locally. But each county's wider promotional activities will be undermined to some degree if these projects fail due to poisoning. The deaths of these birds by poisoning are being widely publicized abroad, especially in the donor countries (Norway, Scotland, Wales) where legislation banning the use of such poisons has been in place for several decades.

Project Manager, Allan Mee of the Golden Eagle Trust said, "The sad thing is that none of this needs to happen. Landowners and eagles should be able to coexist in Kerry just as they do in Norway where White-tailed Eagles nest next to farms. Something has to be done about the poisoning situation or more eagles with die. It's a national disgrace that we continue to mindlessly wipe out wildlife by using poisons in this day and age."

Alan Lauder, BirdWatch Ireland's Head of Conservation said, "These poisonings sadden us. The efforts of the Golden Eagle Trust, the National Parks and Wildlife Service and other project partners, volunteers and stakeholders who wish to see the projects succeed are being let down by the actions of some irresponsible individuals. Most landowners would choose safer, more targeted and legitimate methods of pest control than opt to use indiscriminate and potentially harmful poison baits."

Alan continued, "These poisonings highlight the failure of the domestic legislation to adequately protect our wild birds and also show how the irresponsible actions of a few individuals affect not only the lives of majestic birds of prey but the livelihoods of local people in communities that depend on wildlife to attract visitors. If these poisonings persist they will continue to blight the country's reputation and potentially scupper attempts to restore some precious parts of Ireland's heritage."

The Golden Eagle Trust, the charity managing all three projects in partnership with the National Parks and Wildlife Service, believes the current "light regulation" of poisoning in Ireland is simply killing too many Eagles and Kites. Poisoning has now been proven to be a real threat to the national effort, funded by Irish tax payer's money, to restore our native Irish Eagles and Kites. Birds of prey can co-exist with modern farming practices, as happens elsewhere across Europe. The GET would like to highlight the enormous support the reintroduction projects receive from the large majority of landowners, farmers, gun clubs, schools, hill walkers, tourism interests and many others, but must stress that reckless poisoning is an outdated and selfish habit of a very small minority of individuals.

Last modified on Friday, 09 March 2012 17:30
Published in GET General updates
More in this category: Fears over Springtime Poisoning Incidents »
back to top