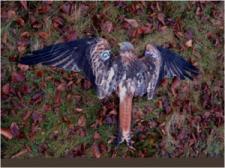 There is disappointing news again this week for the Wicklow Red Kite Reintroduction Project as yet another bird has been confirmed poisoned. The bird, a female Red Kite was found dead in the Brittas Bay area in late December. Since her release in July 07, she had found a mate and was known to have successfully bred and raised three young at a site near Redcross, Co Wicklow. A member of the public reported the finding to the National Parks and Wildlife Service (NPWS).

The apparent good condition of the bird lead Conservation Rangers to suspect poisoning and following new Raptor Monitoring Protocols developed by the NPWS, The Department of Agriculture, Food and the Marine and the State Laboratory, the bird was sent for toxicology testing at the Regional Veterinary Laboratory. The results, received earlier this week, confirm poisoning with alphachloralose, a poison whose only legal use can be for the control of mice and then only in a controlled manner and dosages.

Minister Deenihan expressed his disappointment on this development saying ?this was the second such case of poisoning of a Red Kite in the area in a six week period. Seven Red Kites are known to have been killed in this way in Co. Wicklow since the project began in 2007. This is the third Red Kite poisoned with alphachloralose in Wicklow during the past five months. I would appeal to people to act responsibly when it comes to implementing pest control measures, and, they should never be at the cost of causing death to birds of prey and other wildlife?

Regulations on the restrictions on the use of poisons legislate that their use to control birds and foxes is now illegal. Unfortunately, some landowners continue to use illegal poisons indiscriminately.

?As a result of their specialist scavenging habits Red Kites and other scavenging birds are particularly vulnerable and are usually one of the first to find poison baits or meat left out in indiscriminate, and illegal, poisoning attempts. The irresponsible use of poison baits has also killed numerous working dogs and domestic pets, in some cases where families had just taken their dog for a walk in the woods?, added Minister Deenihan.

Dr Marc Ruddock, Red Kite project manager comments, ?This is demoralizing loss to the Red Kite population in Wicklow with the death of one of the breeding females. The Golden Eagle Trust condemns such irresponsible activity which continues to poison and kill Red Kites, other wildlife and dogs. We would urge anyone with further information to contact their local NPWS ranger or the Garda Síochána and to assist their enquiries and help identify and confront the few individuals who repeatedly and illegally poison wildlife. These illegal actions jeopardise local biodiversity and the economically important and deserved reputation and profile natural Wicklow cherishes.?

The National Parks and Wildlife Service welcomes any information on this case and the use of illegal poisons generally. You can contact their Regional Office in Laragh on 0404-45800 or email This e-mail address is being protected from spambots. You need JavaScript enabled to view it .

The National Parks and Wildlife Service are charged with the protection of wild birds through the enforcement of the Wildlife Act 1976 and EC Birds Directive 1979. All cases of poisoning are treated seriously and searches of lands and premises are routinely done in the investigation of these offences.

The Red Kite Reintroduction Project has successfully released 120 Red Kites into Wicklow, and anyone who has seen them can attest to their captivating soaring and flying ability. Support for the project from Gun Clubs, Landowners, Farmers, and Tourism Bodies has been good and losses such as this are disappointing for all those involved. This particular kite, Blue Purple G, was amongst the first young kites collected in mid-Wales in 2007 in the first year of the project. Since her release in July 07, she found a mate and is known to have successfully bred and raised three young at a site near Redcross, Co Wicklow. The name blue purple G refers to the unique colour/ number combination of the wing tags fitted which allows project managers to identify each bird.

Rangers of the National Parks and Wildlife Service exercised legal powers conferred under the European Communities (Birds and Natural Habitats) (Restrictions on use of Poisoned Bait) Regulations 2010 and conducted a search of the lands and door to door enquiries. No further birds, animals or bait items were discovered