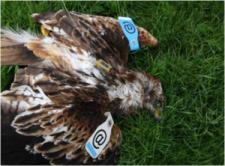 Following the successful release of red kites during the summer in Dublin and Wicklow, it is with disappointment that we report further recent kite deaths in Fingal. Since the release in July, this year, a total of eight [8] kites have now been recovered dead in Fingal since November.

The deaths include the satellite tagged kite '@' which has flown as far as Co. Mayo on its travels and within a few weeks of returning to Fingal was found dead near Lusk.

Ms Phil Moore, from the Fingal LEADER Partnership expressed sadness saying 'We just can't believe "our baby" is dead. We have all been following the satellite tagged kite since her release and have pictures all over the office of her journey; it is upsetting to know she is now dead'.

There were 39 red kites, collected for Fingal under licence from Wales with project partners, the Welsh Kite Trust. The Fingal Red Kite release programme is part of the final and fifth year of an ambitious project to re-establish red kites in Ireland. The deaths represent just over 20% of the red kites released in the Fingal area.

The Golden Eagle Trust is managing the project, which is funded by Fingal LEADER Partnership through the Rural Development Programme 2007 – 2013 and the National Parks and Wildlife Service (NPWS). Fingal County Council, at Newbridge Demesne, and a private landowner hosted and facilitated the two separate release cages.

The project is widely supported throughout local communities, a suite of volunteers and landowners. There were over 100 people involved in cage building, collections, feeding and subsequent monitoring of the released kites.

Each kite is fitted with a radio tag which has allowed the project team to follow the kites' movements since release. Whilst these tags allow us to track their daily movements they have also led us to find the dead birds.

Dr Marc Ruddock, Red Kite Project Manager, said 'There is nothing more heart-breaking than having to pick up the carcass of bird and putting it in a bag for post-mortem after having followed its development from a small, downy chick collected in Wales and then watching it flying free in Fingal'.

Early in 2011, a post-mortem protocol was agreed between NPWS, Department of Agriculture and the State Laboratory. Each of the red kite carcasses has been sent for testing at Backweston Campus, to establish the cause of death. This process and the rigorous work undertaken is fundamental to the growing understanding of environmental issues and the threats posed to kites and other wildlife.

It has now been confirmed that at least four of the kites contained the second-generation rodenticide, brodifacoum. This is an anti-coagulant rat poison usually recommended for indoor use only, which causes internal bleeding. It is widely recognised that rodenticides can kill non-target species.

Dietary analysis of the red kites, both in Wicklow and Dublin has shown that they are clearly hunting and scavenging rats, providing a natural control on rodent populations. The red kite is a specialist scavenger and is therefore likely to be at high risk of secondary poisoning if feeding on rats which are dead or dying from rodenticides.

We recognise the requirement for rat and mice control in terms of human health and food safety. But we urge amateur and professional users alike to ensure that rodent control programs are carefully planned and follow a defined treatment period to be effective.

The over-use of some chemicals could lead to resistance and accumulation in the environment. Those in the countryside should ensure best practice use of these chemicals to allow for more effective rodent control in the long-term and minimise the secondary poisoning risk to non-target wildlife. This includes other rodent-eating native raptors and owls such as kestrels, buzzards, barn owls, long-eared owls and red kites.

Best practice rodent eradication strategies record information such as the quantity and location of all baits and require baits to be regularly inspected and not left exposed to non-target animals and birds. Furthermore, dead rodents should be collected and disposed of safely and baits should be removed at the end of the treatment. Urban and rural rodenticide users are urged to be mindful of the potential environmental effects of the use of chemicals.

The farming and shooting communities in Fingal are very supportive of the project and are anxious to continue to control rats and mice effectively and minimise unintentional consequences for natural rat predators.