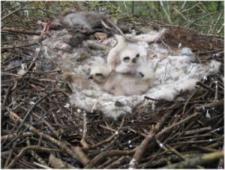 Red kites bred successfully again in Wicklow during the summer of 2011 producing 17 wild young kites. The final phase of the red kite re-introduction was completed with the release of 59 kites in Wicklow and Dublin. Now in the autumn we report disappointing news that a red kite has been poisoned in Wicklow. The kite was poisoned with alphachloralose.

The dead kite was handed in by a member of the public to the National Parks & Wildlife Service (NPWS) Headquarters at Wicklow Mountains National Park. Dead raptors are sent for testing at the State Veterinary Laboratories at Celbridge which confirmed poisoning as the cause of death of the kite.

The week before the kite was found dead, a buzzard was found a short distance away in the same area and it too was later confirmed to have been poisoned with alphachloralose.

These unnecessary deaths have caused serious concern amongst the red kite project team and the local NPWS rangers. These incidents happened north of Woodenbridge, near the core area where red kites spend the winter in communal roosts. In this same area the red kite project has attracted widespread support from local farming, game-shooting and bird-watching communities and amongst local residents and businesses. However, someone in Wicklow continues to flaunt the legislation, and two raptors have died needlessly as a result.

The worst recorded year for poisoning of the re-introduced raptors was 2010 and included four red kites, four white-tailed eagles and two golden eagles (including one poisoned in Co. Tyrone, Northern Ireland). Following additional legislation, which was enacted by the Irish Government in October 2010, to tighten restrictions on poisoning and increased penalties gave cause for optimism as no red kites, white-tailed eagles or golden eagles had been confirmed poisoned during 2011 - until now. However, at least two peregrines and two buzzards have been confirmed poisoned earlier in the year.

The confirmation of the illegal use of poisons has triggered on-going searches and enquiries in the area. The National Parks & Wildlife Service; of the Department of Arts, Heritage and the Gaeltacht are responsible for the implementation of Irish wildlife legislation and under the "Restrictions on Use of Poisoned Bait Regulations 2010 (Statutory Instrument 481 of 2010)" Authorised Officers have extensive powers to enter land and premises and to carry out inspections and remove samples for examination, where poisoning has been confirmed.

An NPWS spokesperson stated "some searches have been carried out and more searches will be conducted as required".

Experience in Wales over the last century prove that the light weight kite is not a threat to livestock, game birds or racing pigeons. These are specialist scavengers and kill only smaller prey species. Diet analysis of red kites, in Wicklow over the past two years has revealed they are mostly feeding on invertebrates, rats and young crows; particularly magpies and rooks.

The Golden Eagle Trust and National Parks & Wildlife Service would urge anyone with further information to contact their local NPWS ranger or An Garda Síochána to assist enquiries and help tackle the minority who continue to illegally poison wildlife.