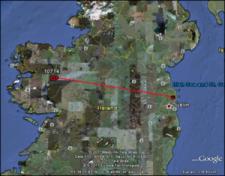 As the project begins to settle and radio-tracking is well underway, big movements have been occuring over the past few days with the kites.

Imagine the surprise when we opened the satellite data to begin to digitise the maps for the new web page....(have a look at the attached photo) and it seems as if the bird we fitted with a satellite transmitter has decided to head west...190km west....

The Newbridge birds have becomes increasingly mobile over the recent weeks as the birds begin to find their wings and start exploring. Most are within a few kilometres of the release locations, however late last week and over the weekend some of the birds have really started to move and several kite sightings have now been recorded from north Galway and in Mayo. Exciting movements indeed!

We are just updating all the maps to upload all the movements of the satellite tagged birds, so keep an eye out for the new maps over the next few days. We did however want to share this amazing movement with you all and to say to everyone to keep an eye out for kites and especially if you can get a look at the wing-tags and help us in monitoring the kites as they begin to explore further afield.