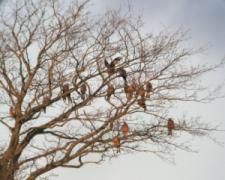 In the early part of the year the kites were mainly tracked in and around their communal roosts. This allows for those kites that have now dropped their radios, the 2007 birds, to be monitored visually by sighting their wing tags. By February, 21 of the original 30 kites released, in 2007, had been identified at a roost site at some point over the winter. This gives a minimum first year survival rate of 70%, a very respectable figure. At the same time the 2008 birds were also monitored through a combination of radio tracking and sighting of wing tags at the roost. By the end of February a minimum of 19 of the 26 birds released in July 2008 were still present in the general Avoca area.

There were no confirmed sightings of live wing tagged kites from the Wicklow release outside of Co. Wicklow during this time. One kite was recovered dead in Co. Limerick, this is covered in detail below. There have been a number of reliable sightings of kites in various parts of the country but without wing tag readings it is impossible to say whether these were Wicklow, Down, Scottish or Welsh birds.

Two of the kites released in 2008 were fitted with satellite back packs and these allow the birds to be monitored without the requirement for the bird to be seen or being in range to be picked up the radio receiver. The tags fitted on these two birds operate on a different system than the normal GPS system used in Sat Nav in cars etc. These smaller, lighter tags can not deliver the level of accuracy a GPS tag can, nor can they be forced to record data at regular intervals, hence the somewhat patchy data coming in on them. Never the less to date they have given us an interesting look at the movements of these two juvenile kites. The individual locations can be viewed on the website in the “Maps & GPS Tracking Section”. A brief summary of the movements follows.

Female Black T was fitted with a slightly smaller 9.5 g tag than the other female, Black K. During this six month period this tag provided more data than the larger 12g tag, a total of 84 usable fixes, compared to 27. Both birds have been fairly sedentary, the locations provided by the tags and sightings of the two birds confirms that the vast majority of their time has been spent in the general Avoca area. Black K was only recorded outside of Wicklow once, on the 2nd February it was recorded at Ballindangan, Co. Wexford. In comparison Black T has made two long dispersive movements from the core area, but both these have been for short durations only, with the bird quickly returning to Co. Wicklow.

On May 6th, Black T was recorded in Wicklow, the next location recorded was on May 11th when it was Co. Clare, three days later it was in Co. Tipperary and by the 16th May it was back in Co. Wicklow. This bird undertook another exploratory flight in June. On June 13th this bird was moving north and was recorded in Dublin, Meath and Armagh all in the one day. It then took up residence in Co. Down for four days and during this time it is difficult to imagine that it would not have encountered the Northern Ireland kites. By the 20th of June it was on its way south again and by the 23rd was back on its usual grounds in Co. Wicklow.

From early March the focus of monitoring switched to looking for potential breeders. As there were now at least 21 mature kites in the area it was expected there would be a number of breeding attempts. Some pairs had formed in spring 2008 and most of these were still obvious in 2009. Early on in the breeding season the signs were all very positive and a minimum of five territorial pairs were recorded.

All five territorial pairs gave strong indications that they would attempt to breed. Three of the pairs were seen engaged in stick carrying. Two of the pairs was seen mating on a number of occasions. Ultimately two pairs were recorded attempting breeding and one other pair built a rudimentary nest.

On April 2nd the first nest was located. On this date the female was sitting, apparently already incubating a clutch of eggs. It was later confirmed that this nest contained three eggs. The second nest was located on the 28th April and this nest contained two eggs. Unfortunately both pairs deserted their nests prior to hatching. The ultimate cause of failure is not known, but inexperience of the young pairs and a particularly wet spring may well have been contributory factors. It is also suspected that the male of one of the pairs was involved in a polygamous pairing with another female. Polygamy has been occasionally recorded in kites elsewhere but rarely results in successful breeding.

The collection of the 2009 young began on the 7th June, when a team from the Golden Eagle Trust and RSPB Northern Ireland travelled to Wales to meet up with the Welsh Kite Trust. Our target this year was to collect 53 birds, the same as in 2008. Within a few days of collecting we became aware that it had been a particularly bad breeding season in Wales and the number of broods of two or more was well down on last year.

Unlike previous years where the collection had been completed with a day or two to spare, this season we still looking for young on the last day of the two week collection period. In total 52 young kites were collected, 26 each for the Golden Eagle Trust and RSPB NI. It was a real effort to get those 52 birds and that we were able to get such a number of young in a poor breeding season is a real testament to the dedication of the Welsh Kite Trust. Thanks in particular are owed to Tony Cross of the Welsh Kite Trust, Chris Powell at Gigrin farm and all the Welsh farmers and landowners that allowed us collect our donor stock on their lands.

The kites were housed in the release cages until July 22nd. Unfortunately this year one of the kites died during the captive period. This kite had been collected during the first week of collection in Wales and died after two days of captivity in Ireland. This year due to an apparent change in Department of Agriculture policy the kites were under a thirty day quarantine. Because of the quarantine the dead kite was sent for testing to the Dept. of Agriculture labs in Celbridge where it was screened for a range of diseases. Nothing was detected and the cause of death was not determined. The bird may well have suffered some trauma during the collection period or earlier in the nest.

During the period in captivity the kites are fed a diet that closes matches what they might be given in the wild. The diet they are fed on is primarily rabbit, with some birds and venison. Importantly all food given to the kites is lead free.

Prior to 2009 the last recorded mortality of a released kite was November 2007. Disappointingly in March this year two dead kites were reported, both in the same week. The first bird, a 2008 bird “Black n”, was recovered on the 16th March near Tiglin, Ashford, Co. Wicklow. The body was in excellent condition and it was suspected the bird had been poisoned. On the 20th March a second 2008 bird was recovered dead, “Black e”, this time from Patrickswell, Co. Limerick. Again the kite looked in excellent condition and poisoning was suspected.

Both birds were sent to the State lab in Celbridge for testing. Black n was quickly confirmed as having high concentrations of alphachloralose in its system and this was determined to having been the cause of death. Nothing was detected in the samples tested from “Black e”. For further testing of this bird, samples were sent to SASA ( Science and Advice for Scottish Agriculture). This organisation has a lot of expertise in toxicology. Again nothing was detected in the samples and the cause of death remains unknown.