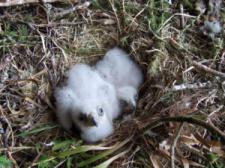 A pair of Golden Eagles has hatched 2 young chicks in Glenveagh National Park, County Donegal. This is the same pair that reared a chick in 2007, but they failed to breed in 2008. The chicks are still quite young and it is hoped that they may fledge in late July.

“This project has previously suffered from setbacks due to poisoning and today I wish to highlight the positive and announce that 2 chicks have hatched. This is a flagship biodiversity project which also has the potential to attract much needed tourism into the Donegal area,” so said John Gormley TD Minister for the Environment, Heritage & Local Government, today (15 May 09) as he outlined progress on the Golden Eagle Project.

Golden Eagles have bred every year in Donegal since 2005, but only one chick has fledged in this time. This pair of Golden Eagles has benefitted greatly from being within Glenveagh National Park and its wildlife management system and augment the Park’s Castle and Garden features, which make it Donegal’s premier visitor attraction.

Golden Eagles usually lay two eggs, 2-3 days apart, and as a result the older chick is always bigger and stronger than its younger sibling. On average only 5% of breeding attempts manage to rear and fledge two young. Shortage of food or sibling aggression can result in the loss of the second chick, usually within 3 weeks of hatching. These predators are dependent on feeding chicks with live medium sized prey, which they hunt during suitable weather conditions. Like many predators, this species has evolved to rear one strong chick if there are food shortages, rather than two weaker chicks.

In 2007, this breeding pair in Glenveagh National Park hatched two young but the second chick died and disappeared after only 6-8 days. In light of this experience and the project’s ongoing difficulties in managing to identify and collect sufficient Scottish donor stock from the dwindling number of Scottish nests containing two chicks at 5-8 weeks of age, the Golden Eagle Project Steering Group discussed and agreed to intervene and try to ensure that any ‘second’ chicks found in Irish eyries, particularly at this crucial stage of the entire reintroduction project.

“The weaker chick was removed under an NPWS licence and examined before it was placed in the care of an expert falconer in Glenties, Pedro Soltani. I would like to take this opportunity to thank Mr Soltani for his expert help in this area. Experience from abroad, involving the fostering of vulnerable chicks, had indicated that the best way to rear a very young eagle chick that could not feed itself or keep its own body temperature at night time, was to place it with a breeding pair of captive birds of prey,” added Minister Gormley.

“It is hoped to return the second chick to the Glenveagh nest very shortly as its feathers have begun to emerge through its white down in recent days. This will be another anxious period as the older chick could still possibly bully the returning smaller chick,” he continued.

Results from other similar initiatives would suggest that the risk of the adults rejecting the returning chick or the chick failing to beg sufficiently for food from its parents are very unlikely, but we are unaware of any similar projects specifically with Golden Eagles. However, the considered view of the project steering group was that it was in the best interests of the chick, and the wider project, to enhances its possible survival rate through fostering rather than observe the natural outcome, with its resultant 5% survival rate potential. However, the project team clearly recognise that this type of licensed experimental manipulation is only warranted in exceptional cases, especially at this critical stage of the project and with such a fragile national population.

The older chick has also developed well in the eyrie over the last few weeks. The adult birds returned to the nest shortly after its sibling was removed and have been feeding and brooding as required.

A second pair of Golden Eagles is incubating eggs elsewhere in Donegal at the moment, though this pair has not managed to hatch any young to date. 4 other territories are occupied (by two young pairs and two single adults) and a fifth pair and another single bird seem to be establishing themselves this year in Donegal also (possibly a total of 8 territories in Donegal). The fate of these birds will largely depend on whether or not they encounter poisoned meat baits over the coming years. And whilst we have continuously stressed the support the project receives from the large majority of landowners in Donegal, we must highlight that one or two individuals using poison each spring will take a steady toll on eagles annually.

Indeed several sheep farmers have actually said they have noticed fewer incidents of newborn lambs being attacked by Hooded Crows in the upland areas where Golden Eagles have become established. Golden Eagles catch and eat crows, which tend to be very weary whilst traversing eagle territories.

“The current level of unlawful poisoning; using banned substances, lacing dead livestock left above ground, without notifying the Gardai in writing or without erecting appropriate signage; cannot be allowed to continue. My officials have already prepared a draft of new regulations which will effectively make it illegal to put out poisoned meat or fish- based bait for any purpose. I am anxious to have these regulations put in place as quickly as possible,” continued Minister Gormley.

The Golden Eagle Trust project manager, Lorcán O Toole said “This is a very welcome and timely for the Golden Eagle project. After the difficulties we have encountered with the unforeseen shortage of Scottish donor stock and the disappointment that the Glenveagh pair failed to breed last year and the confirmation of a Golden Eagle poisoned in February, this pair has once again restored the project’s momentum. We have an anxious few months ahead. It would be very encouraging if the pair can manage to successfully rear a chick again and if everything goes well, they could even rear both chicks in Glenveagh. Nonetheless we are very aware of the potential pitfalls and have experience of natural failures in the past. But hopefully come August, the occasional visitor walking down the Glenveagh path may have a brief encounter with a family party of three, or even four, soaring Golden Eagles. Just imagine that!”

He went on to say, “Once again we would like to highlight the support the project has received from the vast majority of farmers and people living in the Hills of Donegal. The project team also wish to thank the NPWS conservation rangers and staff in Glenveagh and Donegal and numerous volunteers who have played a key role in monitoring the nest to date.

The exact location of the nest has not been revealed to the public in order to minimise disturbance to the birds. Glenveagh National Park management urge visitors to the Park not seek out the eyrie.

More background Details on the Golden Eagle Project can be found on the website www.goldeneagle.ie - Please consider signing the anti-poison petition. More information on Glenveagh National Park can be found at www.npws.ie

Last modified on Friday, 09 March 2012 17:29
Published in Golden Eagle updates
More in this category: « Poisoning near Glenveagh Two Chicks Fledge in Glenveagh »
back to top