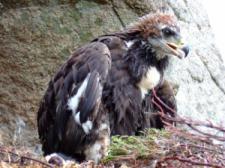 Introduction
Golden Eagles were once a magnificent part of Ireland’s natural heritage. A project to re-establish Golden Eagles in Ireland began in 2000 after many years of planning. The first young Golden Eagles, imported from Scotland, were released in Glenveagh National Park in 2001. The Golden Eagle Trust Limited (Charity No. CHY 14770) is managing the project in association with the project management team. The project was funded by EU LIFE Nature and others and is currently funded by the National Parks and Wildlife Service and the Heritage Council.


Summary of the 2006 Breeding Season
Five territories were occupied by Golden Eagles in Donegal in 2006, two more than in 2005. Two of the four pairs laid eggs but none hatched. One of the breeding pairs consisted of three-year-old birds, which is very unusual. A single male has established a territory in Glenveagh National Park and built a nest in the early summer. As these breeding birds gain experience and mature, we hope to record successful breeding in Donegal in the coming years.

Site: D01
Male: Yellow 2 Spots Female: Yellow Diagonal Bar
From: Glen Affric, Invernesshire 2001 From: Assynt, Sutherland 2001
This was the pair that bred and failed in 2005. The pair was seen on site occasionally during the winter. In mid February they were seen displaying together over several days. On 23 February a new nest, containing large quantities of heather, was found on an exposed ledge near their winter roost site. They had not added any new material to their 2005 nest by early March but a single eagle was seen vigorously defending the 2005 nesting crag from nearby Ravens and an intruding second year Golden Eagle. In early April the 2005 nest had some new material and a second new incomplete eyrie was found nearby on the same cliff. A single eagle was also seen near this site again in May, but a pair had not been seen together since mid February. So no breeding took place this year and though the territory is still occupied, a pair has not been seen on site since mid February.

Site: DO2
Male: Yellow 3 Spots Female: Blue 0
From: Glenfinnan, Lochaber 2001 From: Lude Estate, Tayside 2002
This pair built a rudimentary nest in 2005. An artificial eyrie was built near this nest during the winter. The pair was noted on site several times during the winter and early spring. The four-year-old female still had an obvious band of white on both her underwings, denoting her lack of maturity. The pair was seen in February and March landing on both the artificial eyrie and last year’s nest. Nesting material was added to the old nest in late March and on the 3rd April the female was seen incubating in the 2005 nest. The male and female were seen incubating on the 4th but by the evening of the 5th April the female was noted away from the nest and we could not see if the male was on the nest. A nest check on the 6th April revealed that the first laid egg had rolled or been laid on the edge of the nest. The egg was located under some fresh woodrush on the edge of the nest. The egg was given to a falconer and placed in an incubator, but it failed to hatch. The nest itself had no deep retaining cup to hold an egg. Poor nesting building is usually the result of inexperienced first time breeders. A second broken eggshell was found nearby on the ground among pellets and feathers below a regular perching place. It appears this breeding attempt failed within the first three days, even before the second egg had been laid. The pair is still on site. We have already altered the nest and ensured it now has a deep nest cup. We intend providing other alternative nest sites nearby also.

Site: DO3
Male: Red S Female: Red F
From: Mull 2003 From: Skye 2003
This pair had formed in the late summer of 2005. Their roosting spots were located throughout their territory during the winter. On the 9th April I was following the male bird – its radio had failed some time ago. I was keen to know if this young pair had managed to start a nest. The male was lost behind a crag and as I approached I turned on the radio receiver. From her radio signal, I realized the female was nearby and to my great surprise as I followed her signal, I suddenly saw her incubating on a nest some 50 yards away. The nest was on a small crag, in a sheltered spot at the base of a stunted tree.

Over the next few months this pair were noted incubating constantly. The male bird very often in attendance nearby or incubating himself, which indicated that there was an ample food supply locally. Though she was sitting on the 16 May, by the 17 May the female was not seen on the nest and the two eggs were found to be infertile during a nest check. It is not surprising that such young birds were unable to produce fertile eggs. It is likely she started incubating before the 9th April. But their behaviour suggests they are capable of producing young sometime in the future.

Site: DO4
Male: Blue 5 Female: Green N
From: Blair Atholl, Tayside 2002 From: Glen Esk, Tayside 2004
This pair was noted together in early January while the male’s radio was noted as intermittent and failing. The birds were known to cover a big area and though the female was young she was seen to be aggressive toward other eagles. Despite some fieldwork it was not established whether this pair built a nest this year. The female would almost certainly have been too young to lay eggs.

Site: DO5
Male: Blue 3 Female:
From: Skye 2002 From:
Blue 3 was seen inside Glenveagh National Park periodically during the winter. On one occasion he was seen roosting next to a potential mate. Its display flights were recorded along several kms. of its territory edge in early January. The Glenveagh National Park Conservation Rangers, Seamus McGinty and Robbie Millar, saw this single male carrying nest material in May. The partially built nest was found within the Park boundary. On the 1st August Blue 3 was flushed as it perched next to a Yellow tagged female. Unfortunately, we could not tell if it was either Yellow Diagonal Bar or Yellow Horizontal Bar. Horizontal Bar has not been recorded 28 November 2003, while if Diagonal Bar (Site D01) had lost it mate, it may be prospecting elsewhere. Blue 3 has been seen alone on three separate occasions since then.


Satellite Tagged Eagles
Two Golden Eagle chicks were fitted with Satellite tags prior to release in 2005. Orange 3 remained within the Derryveagh Mountains for most of the winter. It occasionally wandered over to Meenirroy and Cark Mountain to the east in late 2005. During early 2006 it was found predominantly on the western edge of Glenveagh and to the west of Slieve Snacht, where it was located for most of February. It appeared to be quite sedentary and it apparently was roosting in the same area for several weeks. On the 25 March it made a notable foray down off the mountain toward Lough Keel, above Crolly. Later that day it returned to the hills and its signal did not move very much thereafter. It is now thought that the bird either died at this spot or its satellite tag has fallen off here. Without recovering a corpse, one can only speculate as to the cause of any possible mortality. It may have been a result of poisoning, the single foraging trip down to nearby low lying sheep fields on the 25 March being significant, or it may have been losing condition as it did not move around much in the preceding weeks or it may have been accosted by an older eagle as other eagles were known to be in the vicinity. The bird or tag could not be found during a search of this remote area. The transmitter has now stopped sending out signals.

The second satellite tagged bird, Orange 4, has had several distinct foraging areas during its first year. It spent some time in the SW of Donegal between Glengesh, Slieve Toohey, Slieve League and Mulnanaff before skipping eastward onto the Blue Stacks. It spent several weeks wandering all around the Sperrins, between Omagh and Dungiven, and other small adjoining hills in Northern Ireland. This bird is now back in south Donegal and we eagerly await to see its autumnal movements.


Release Programme
In January 2005, we applied to extend our donor stock collection period in Scotland. We were granted an extension in May 2006, but most of eastern Scotland was excluded under the conditions of this licence. There are concerns in Scotland over the level of productivity in eastern Scotland. Some authors suggest that this may be due to increasing persecution, whilst others disagree. This year was a particularly poor year for Golden Eagle productivity in Scotland. For example, we are aware of only one nest with two chicks in Lewis, the Uists, Skye or Mull. The nest on Skye was in an SPA and therefore we were not allowed to remove a chick. We would normally expect to collect 4-6 birds from these islands alone.

Our first three visits to potential donor nests were fruitless as each brood size had suddenly dropped from two chicks to a single chick. We did however manage to collect four birds; one from Canna, Western Isles, one from near Fort Augustus, Loch Ness side and two from Tayside (under a derogation from our initial licence.)

The four birds were quick to develop and were fitted with white wing tags and released on the 18 August 2006. This brings to 46 the number of birds released. We need to release at least 60 birds in order to establish a viable population. Where possible we would like to release 10 birds a year for the next few years.

On the last day of February, a Golden Eagle was seen flying over Foxford, Co Mayo.

A farmer and his wife, in the Blue Stack Mountains, reported a Golden Eagle that swooped into the field next to their house and caught and flew away with a Hooded Crow. At the time on the 3rd January, there was heavy snow on the hills and the farmer was feeding his sheep at troughs near his house and up to 20 Hooded Crows had come in to feed also.