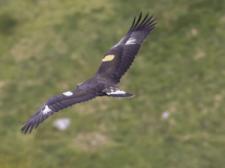 Green T, Green H and Green K were radio tracked wandering around Donegal during December. Orange O and Orange 5 were noted in the Blue Stacks on the 27th and 28th December 2005. Orange 2 was feeding regularly in Glenveagh. Satellite tracking showed Orange 3 was quite sedentary near the release site and just south of Glenveagh while Orange 4 was wandering between the Derryveagh Mountains and Slieve Toohey in SW Donegal.

During a brief period of snow on the 29th December a young Golden Eagle killed and flew away with a Hooded Crow it killed at a sheep trough near an isolated house in the Blue Stack Mountains – to the amazement of the nearby residents. A red-tagged Golden Eagle, released in Glenveagh in 2003, was seen soaring on Rathlin Island by Liam Mc Faul (RSPB) on the 30th December. Did this bird arrive from the north Antrim coast or was it on a return journey from Scotland?

The Golden Eagle breeding season has already commenced with display flights and pair bonding. Hopefully last years breeding pair (Yellow Two Spots and Yellow Diagonal Bar) will attempt to breed again this year. The second pair (Yellow Three Spots and Blue 0) that built the rudimentary nest is still on site and has roosted nearby for most of the winter. The third pair (Red S and Red F) contains 3 year old birds (just into their fourth calendar year) and are unlikely to breed. The fourth potential pair contains a four-year old male, Blue 5, and a two-year old female, Green N that would be too young to breed. Blue 3, a single four-year old male, occupies a fifth known territory. It was seen performing 30 undulations, both shallow and deep dives, on the edge of its territory on the 4th January before patrolling and high soaring along a 6km stretch of its home range.

I would like to thank JK and John Cromie for their assistance with records contained in this report.