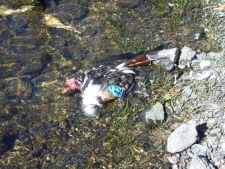 A red kite recently discovered in Vartry Reservoir, Roundwood, Co. Wicklow has been confirmed as poisoned. The bird, identified as Blue Red 42 an Irish bred kite, was reported by a concerned dog walker to Birdwatch Ireland who informed the local National Parks and Wildlife Service staff. An investigation into the matter was immediately begun.

A National Parks and Wildlife Service Ranger responded to the incident and located the carcass which lay only a few hundred metres from residential houses and a local pre-school. The bird which appeared in good condition had a mouth and crop full of fresh food, indicating that cause of death was most likely poisoning. The Vartry Reservoir is used for recreational walking and angling and provides drinking water to the southern suburbs of Dublin.

Minister Deenihan said "The Red Kite is a magnificent bird of prey and is protected by law. I know every effort is being made to find the culprit in this incident, and I would call on any person with any information about this matter to contact the National Parks and Wildlife Service of my Department or An Garda Siochána. The use of this type of poison is strictly limited to the eradication of mice and rats, and should at no time be used in the reckless way it was."

Tests were immediately ordered under the bird of prey post-mortem protocol. A scheme operated by the National Parks & Wildlife Service, the Regional Veterinary Labs (Department of Agriculture, Food and Marine) and the State Laboratory (Department of Finance). Within 48 hours thanks to the experts within the Regional Veterinary Lab and the State Laboratory, both located at Celbridge, the bird was confirmed as having been poisoned by alphachloralose. The legal use of alphachloralose is restricted to the control of rats and mice. Furthermore the stomach contents of the red kite indicate that the poison was placed on meat bait, a practice now banned, largely for the protection of birds of prey. Searches of the area for further casualties or poisoned baits and door to door enquires were conducted by National Parks and Wildlife Service staff and local Gardaí.

The Kite was a wild-bred Wicklow kite from 2012, only 14 months old whose parents were originally brought over from Wales in 2008. The landowner, on whose land the kite was born is very disappointed to hear it has been found dead. Red Kites have only recently made their way as far north as Roundwood and it will be disappointing for many of the locals that had been enjoying their presence to hear of the poisoning.

Dr Marc Ruddock, Red Kite Project Manager, for the Golden Eagle Trust said “This is the height of recklessness and it is imperative that communities and individuals take responsibility for getting the people who are still laying poison to stop immediately. The costs are high for Irish wildlife and the potential human consequences of this incident don’t bear thinking about!” Dr Ruddock, urged people to report any information to National Parks & Wildlife Service (NPWS) or An Garda Siochana and also report poisoning to their local Department of Agriculture office.

Published in Red Kite updates
More in this category: « Two generations of the same kite family – confirmed poisoned Launch of Campaign for Responsible Rodenticide Use (CRRU) Ireland »
back to top